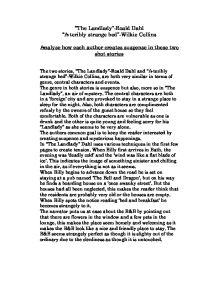 "The Landlady"-Roald Dahl "A teribly strange bed"-Wilkie Collins Analyse how each author creates suspense in these two shot stories The two stories, "The Landlady"-Roald Dahl and "A teribly strange bed"-Wilkie Collins, are both very similar in terms of genre, central characters and events. The genre in both stories is suspence but also, more so in "The Landlady", an air of mystery. The central characters are both in a 'foreign' city and are provoked to stay in a strange place to sleep for the night. Also, both characters are complimented refusly by the owners of the guest house so they feel comfortable. Both of the characters are vulnerable as one is drunk and the other is quite young and feeling sorry for his "Landlady" as she seems to be very alone. The authors common goal is to keep the reader interested by creating suspence and mysterious happenings. In "The Landlady" Dahl uses various techniques in the first few pages to create tension. When Billy first arrives in Bath, the evening was 'deadly cold' and the 'wind was like a flat blade of ice'. This indicates the image of something sinister and chilling in the air, as if everything is not as it seems. When Billy begins to advance down the road he is set on staying at a pub named 'The Bell and Dragon', but on his way he finds a boarding house on a 'once swanky street'. But the houses had all been neglected, this makes the reader think that the residents are probably very old or the houses are empty. ...read more.

When Billy asks if they left fairly recently the landlady replies in shock, 'Left? They never left...They're on the third floor, both of them together.' This lines tells the reader that the landlady is not as she seems. She must be holding a dark secret. Billy is obviously shocked at what he had just heard so '...one of her white hands patted him comfortingly on the knee.' She is trying to reassure him that everything is alright, and that he shouldn't be alarmed by what he has just heard. This makes the reader become very aware that something very strange has happened, and the landlady is unveiling her secrets to Billy. The reader would be suprised by this as she seemed quite gentle and kind. You fell that something terrible is going to happen when the landlady tells Billy that the guessed had never left the house, this makes you wonder if Billy will be victim to a gruesome murder. The Old soldier in "A teribly strange bed" automatically seems to be more of an untrustworthy character,the landlady as he becomes intrigued by the narrators affairs at once. After Faulkner's friend leaves, the old soldier approaches him and whispers hoarsely in his ear that Faulkner had dropped some money and he was returning them. The old soldier explains to Faulkner that he has never seen anyone have the amount of luck he is having before. The old soldier seems to be in awe of Faulkner and treats him as though he is a hero. ...read more.

In 'A Terribly Strange Bed' we receive a detailed account of the hero's escape, this is not exciting as everything suddenly becomes back to normal. Dahl's ending in 'The Landlady' creates a lot more excitement and tension as the ending is left unfinished, so the reader can conclude what has happened to the victim. Many hints are given in this story to show what fate may bring Billy. When she speaks of he past guests she knows personal details about them, 'His skin was just like a baby's' There is a stuffed parrot and dachshund in the landlady's sitting room. She says to Billy 'I stuff all my little pets.' This could be interpreted that she may do the same to Billy. At the end of 'A Terribly Strange Bed' the reader is left feeling glad that, Faulkner is able to put what happened behind him and that by him escaping may have saved the lives of others. The reader can foresee the ending so there are no real suprises that Faulkner managed to escape. The author chose to do this so he could give explicit detail on the thoughts and feelings of the character and describe the events as they happen. It is also to create fear and suspense that Faulkner is in this situation and then becomes a hero. Dahl chose to leave his story open-ended so the reader can conclude the fate of Billy for themselves. The reader feels upset at the end as they want to know what is going to happen. The ending is unclear and seems to be unfinished. I prefer this as it adds a new edge of excitement and uncertainty. ...read more.