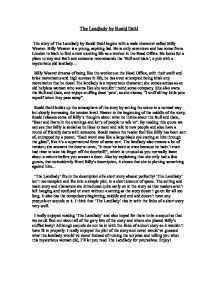 The Landlady by Roald Dahl

The story of The Landlady by Roald Dahl begins with a male character called Billy Weaver. Billy Weaver is a young, aspiring lad. He is only seventeen and has come from London to Bath to find a new exciting life as a worker in the Head Office. He looks for a place to stay and Bath and someone recommends the ‘Bull and Gate’, a pub with a mysterious old landlady…

Billy Weaver dreams of being like the workers at the Head Office, with their swift and brisk movements and high success in life, he has even attempted being brisk any movements that he does! The landlady is a mysterious character; she comes across as an old helpless woman who seems like she wouldn’t mind some company. She also owns the Bull and Gate, and enjoys stuffing dead ‘pets’, as she claims, “I stuff all my little pets myself when they pass away”.

Roald Dahl builds up the atmosphere of the story by setting the scene in a normal way but slowly increasing the tension level. Nearer to the beginning of the middle of the story, Roald releases some of Billy’s thoughts about what he thinks about the Bull and Gate, “Beer and Darts in the evenings and lot’s of people to talk to”. By reading this quote we can see that Billy is social as he likes to meet and talk to new people and also have a round of friendly darts with someone. Roald makes the reader feel like Billy has been sort of, entrapped by a poster, “Each word was like a large black eye staring at him through the glass”, like it’s a supernatural force of some sort. The landlady also creates a lot of tension; she answers the door at once, “it must’ve been at once because he hadn’t even had time to take his finger off the doorbell!”, which is unusual as you normally leave about a minute before you answer a door. Also by explaining that she only had a few guests, that coincidently fitted Billy’s description, it shows that she is plotting something against him…

‘The Landlady’ fits in the description of a short story almost perfectly! ‘The Landlady’ isn’t too complex and fits into a simple plot, in a short amount of space. The setting and main story and characters are introduced quite early on in the story so that readers aren’t left hanging and confused or even without a setting as the story doesn’t go on for all too long. It also has the compulsory beginning, middle and end and doesn’t have any prequels or sequels to it. I think that ‘The Landlady’ ties in with the links of a short story very well.

I really enjoyed reading ‘The Landlady’ and also hoped for there to be a sequel so that we could find out about all of the gory bits of the story and where she placed Billy’s stuffed body! Although sequels do not tie in with the links of a short story so it wouldn’t have fit in properly. I really enjoyed the plot of the story and never would’ve guessed what the landlady would’ve done! Instead of ruining the surprise and telling you what this mysterious woman did, I’ll let you read The Landlady for yourselves. Enjoy!