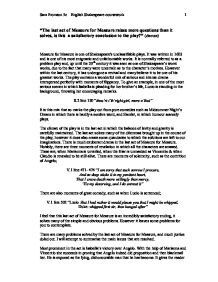 &quot;The last act of Measure for Measure raises more questions than it solves, is this a satisfactory conclusion to the play?&quot;

"The last act of Measure for Measure raises more questions than it solves, is this a satisfactory conclusion to the play?" (discuss) Measure for Measure is one of Shakespeare's unclassifiable plays. It was written in 1603 and is one of his most enigmatic and unfathomable works. It is normally referred to as a problem play and, up until the 20th century it was seen as one of Shakespeare's worst works, due to the fact that many were uncertain as to the character's motives. However within the last century, it has undergone a revival and many believe it to be one of his greatest works. The play contains a wonderful mix of serious and intense drama interspersed perfectly with moments of flippancy. To give an example, in one of the most serious scenes in which Isabella is pleading for her brother's life, Lucio is standing in the background, throwing her encouraging remarks. II.2 line 130 "thou'rt i'th'right girl, more o'that" It is this mix that so marks the play out from pure comedies such as Midsummer Night's Dream in which there is hardly a sombre word, and Hamlet, in which humour scarcely plays. The climax of the play is in the last act in which the balance of levity and gravity is carefully maintained. The last act solves many of the dilemmas brought up in the course of the play, however it does also create some quandaries to which the solutions are left to our imaginations. ...read more.

At the beginning she had to be encouraged to plead for her own brother's life; II.2 lines 42-46 "Isabella: O just but severe law! I had a brother, then. Heaven keep your honour! Lucio: [Aside to Isabella] Give't not o'er so: to him again, entreat him; Kneel down before him, hang upon his gown: You are too cold; if you should need a pin, You could not with more tame a tongue desire it: To him, I say!" However, here she is pleading on behalf of a man just as guilty, if not more so than her brother was. This resolves the matter of Isabella's compassion. She has been portrayed earlier in the play as cold and unfeeling, however here we see that her character has evolved. This is an incredibly important issue that Shakespeare so effortlessly resolves and it increases the quality of the play's conclusion. It is satisfying in a play when you feel that the characters have matured throughout it. Angelo's life is spared and we also are shown that his character is reformed. The strength of his remorse is powerful and leads us to believe that he will be more empathetic towards others in the future. V.1 line 471- 474 "I am sorry that such sorrow I procure, And so deep sticks it in my penitent heart, That I crave death more willingly than mercy, 'Tis my deserving, and I do entreat it" The third of the major revelations in this act and the last serious issue to be solved is the re-emergence of Claudio. ...read more.

The last problem is whether the relationship between Claudio and Isabella will recover. She berated him very severely for suggesting that she acquiesce to Angelo's demands, when a gentle let down might have been more in order. He in turn was absolutely distraught that he had weakened enough to ask her to do such a thing. I do think that they will make it up, however it would have been comforting to see them on good terms. Overall I do think that this last act of Measure for Measure is a satisfactory conclusion to the play. A number of plot lines reach their climax and are resolved. Although it does leave a couple of major, and one minor problem unresolved, they do not detract from its sufficiency. Far from detracting from its adequacy, I feel that these unresolved difficulties increase its merits as an ending to the play. They leave something for the audience to think about and ensures that the ending is not too simplistic. Shakespeare does not treat us like children and spell out every last detail. To my mind, leaving some aspects of the conclusion to the audience's own judgement makes this play more sophisticated and far less shallow than some of his comedies. This play ends on a positive note with two couples more or less successfully matched and order restored to Vienna, whilst it leaves the theatre goer to mull over the final fate of Isabella and Vincentio. 1 Sam Fromson 5c English Shakespeare coursework ...read more.