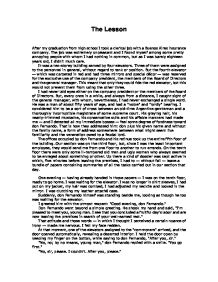 The Lesson After my graduation from high school I took a clerical job with a Buenos Aires insurance company. The job was extremely unpleasant and I found myself among some pretty annoying people with whom I had nothing in common, but as I was barely eighteen years old, I didn't much care. It was a ten-storey building served by four elevators. Three of them were assigned to the personnel in general, without regard to rank or position. But the fourth elevator - which was carpeted in red and had three mirrors and special d�cor - was reserved for the exclusive use of the company president, the members of the Board of Directors and the general manager. This meant that only they could ride the red elevator, but this would not prevent them from using the other three. I had never laid eyes either on the company president or the members of the Board of Directors. But, every once in a while, and always from a distance, I caught sight of the general manager, with whom, nevertheless, I had never exchanged a single word. He was a man of about fifty years of age, and had a "noble" and "lordly" bearing. I considered him to be a sort of cross between an old-time Argentine gentleman and a thoroughly incorruptible magistrate of some supreme court. His graying hair, his neatly-trimmed mustache, his conservative suits and his affable manners had made me - and I detested all my immediate bosses - feel some degree of fondness toward don Fernando. ...read more.

"And didn't Mr. Biotti ever tell you that you ought to respect the chain of command within the company?" "Wha, what, sir?" "What is your name?" "Roberto Kriskovich." "Oh, a Polish name." "No, sir, it's not Polish. It's a Croatian name." We had finally landed on the ground floor. Don Fernando, who was next to the doors, stepped to one side to allow me to go out first. "Please," he ordered. "No, sir, please," I answered. I was extremely nervous. "After you." Don Fernando gave me a look that seemed to bore a hole in me. "Young man, please, I implore you, get out." Intimidated, I obeyed. "It's never too late to learn, young man," he said, as he stepped out into the street ahead of me. "Have a cup of coffee on me." And so we went into the corner cafeteria, with don Fernando leading the way, me following behind. This is how I found myself face to face with the general manager with nothing but the table separating us. "How long have you been working for the company?" "I began last December, sir." "In other words, it hasn't even been a year that you've worked here." "It will be nine months next week, don Fernando." "Well then: I've been with this firm for twenty seven years." He gave me another of those hard looks. Since I felt he expected some reaction from me, I nodded my head, trying to show some kind of restrained admiration. ...read more.

We have had two cups of coffee. Who will pick up the tab?" "I would be glad to do it." "You have lied to me once again. You, who receive a very low salary, cannot be happy to pay for the general manager's coffee when you know the general manager makes more in one month than you will in two years. So, I'm asking you not to lie to me and to tell me the truth: Is it true that you like paying for my coffee?" "No, don Fernando, the truth is that I don't like it." "But, despite the fact that you don't like it, are you prepared to do it?" "Yes, don Fernando, I'm prepared to do it." "Well then, go ahead and do it! Pay and don't make me waste more time, for heaven's sake!" I called the waiter over and paid for the two coffees. We went out into the street, don Fernando ahead of me. We found ourselves at the entrance to the subway. "Very well, young man, I'm going to have to take my leave of you now. I sincerely hope you have internalized the lesson and that you will profit from it in the future." He shook my hand and went down the stairs to the Florida subway station. I've already said that I didn't like that job. Before the year was up, I took a less unpleasant job with another company. During the last two months I worked for that insurance company, I saw don Fernando a couple of times, but always from a distance, so I never again received any other lessons from him. ...read more.