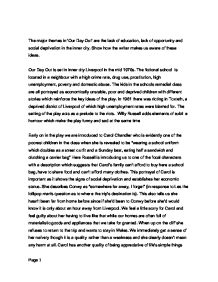 The main themes in Our Day Out are lack of education, lack of opportunity and social deprivation. Show how the writer makes us aware of these themes

The major themes in 'Our Day Out' are the lack of education, lack of opportunity and social deprivation in the inner city. Show how the writer makes us aware of these ideas. Our Day Out is set in inner city Liverpool in the mid 1970s. The fictional school is located in a neighbour with a high crime rate, drug use, prostitution, high unemployment, poverty and domestic abuse. The kids in the schools remedial class are all portrayed as economically unstable, poor and deprived children with different stories which reinforce the key ideas of the play. In 1981 there was rioting in Toxteth, a deprived district of Liverpool of which high unemployment rates were blamed for. The setting of the play acts as a prelude to the riots. Willy Russell adds elements of subtle humour which make the play funny and sad at the same time Early on in the play we are introduced to Carol Chandler who is evidently one of the poorest children in the class when she is revealed to be "wearing a school uniform which doubles as a street outfit and a Sunday best, eating half a sandwich and clutching a carrier bag" Here Russell is introducing us to one of the focal characters with a description which suggests that Carol's family can't afford to buy here a school bag, have to share food and can't afford many clothes. ...read more.

In a conversation with Colin, a young, less experienced teacher Briggs says "well you have to risk being disliked if you're to do any good for these children" and refers to Mrs Kay's teaching method as "woolly-headed liberalism". From this we can easily draw a conclusion that Mr Briggs doesn't think about the consequences of ruthlessness and all he is concerned about is positive results. Briggs obviously thinks because the kids missed out on a lot of education earlier in life they need some sort of intensive education technique if things are to be put right. He clearly sees respect from the kids as a nice extra when really it is essential. Also, when Mrs Kay changes the itinerary of the trip and takes the class to the zoo, Mr Briggs' response tells us he doesn't want to deviate from the schedule and keep the kids bored, something in Briggs' opinion would do the kids a bit of good. Colin later calls Mr Briggs a burke, and from this we can deduce that Mr Briggs is no more popular with his colleagues as he is with the students. On the other hand, Mrs Kay has a far more relaxed approach to educating the kids and a motherly, matriarchal attitude to the children-the two qualities awarding her street-cred with the kids. Mr Briggs sees this as a bad thing (he also thinks she has a motherly air) ...read more.

Willy Russell moves the play to a more dramatic climax which creates suspense-a literary device previously unused in the play. Carol's naivety is reinforced by her explicit desire to remain in Wales. At this point Briggs doesn't change in personality but is now powerless and has no way of controlling Carol's erratic and suicidal behaviour though knowing Briggs he is probably more concerned about being struck off and a legal inquiry than Carol's state of mind and only told her she had hope to avoid the two aforementioned crises. When Briggs changes his ways Russell manipulates the audience into thinking Briggs is changing permanently and he will help the kids catch up and excel in life. However our expectations are dashed when the class returns to the city. When Reilly describes the city as "horrible when you come back to it", Russell tells the audience that the children must be used to their neighbourhood after 13-15 years of entrapment in the inner city. Linda is unsure what Reilly is talking about which shows that she was taken in by the trip. Russell's message to the audience is that living in the inner city of Liverpool can toughen one up and as a result, enables the kids to survive almost anything. The ending is disappointing yet realistic and Briggs making a fool of himself through singing a ridiculous song in a cowboy hat adds a humorous side to this sombre scene. Page 4 ...read more.