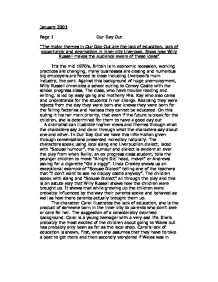 &quot;The major themes in Our Day Out are the lack of education, lack of opportunity and deprivation in inner city Liverpool - Show how Willy Russell makes the audience aware of these ideas&quot;.

January 2003 Page 1 Our Day Out "The major themes in Our Day Out are the lack of education, lack of opportunity and deprivation in inner city Liverpool. Show how Willy Russell makes the audience aware of these ideas" It's the mid 1970's, Britain is in economic recession, working practices are changing, many businesses are closing and numerous big employers are forced to close including Liverpool's main industry, the port. Against this background of huge unemployment, Willy Russell chronicles a school outing to Conwy Castle with the school progress class. The class, who have trouble reading and writing, is led by easy going and motherly Mrs. Kay who also cares and understands for the students in her charge. Realising they were rejects from the day they were born she knows they were born for the failing factories and realises they cannot be educated. On this outing it his her main priority, that even if the future is bleak for the children, she is determined for them to have a good day out A dramatist can illustrate his/her views and themes through what the characters say and do or through what the characters say about one and other. In Our Day Out we have this information given through conversations presented incredibly naturally. The characters speak using local slang and Liverpudlian dialect, laced with "Scouse humour", the humour and dialect is evident all over the play from when Reilly, an ex progress class student, tells the younger children to move "Alright Dic`head, move!" or Andrews asking for a cigarette "Giz a ciggy". Linda Croxley shows us an exceptional example of "Scouse Dialect" telling one of the teachers that "I don't want to see no crappy castle anyway". ...read more.

The audience really feels that it's tragic as the children's lives are empty, meaningless and without direction, so Willy Russell's themes are conveyed but we the audience don't feel as if were being preached at and thus were more receptive. Some of the moments in Our Day Out are exceedingly funny and sometimes were made to feel sorry for the students but they're not for themselves. This is a very good January 2003 Page 4 Our Day Out way that Willy Russell uses to make the themes have a bigger impact. The conflict that developed between Mrs. Kay and Briggs, allows Willy Russell to build to a dramatic climax. After the whole day with Briggs telling Mrs. Kay what to do, she explodes and looses her temper at Conwy Castle and her outburst allows Willy Russell's views to be explicitly promoted. What Willy Russell has done is used a character as a "mouth piece" for his ideas. Briggs has a very strict teaching attitude and believes Mrs. Kay only wants to be liked by the children and that she's "on their side". Briggs sees everything about the trip as chaos and tries to use strict methods to educate them but to no avail they just want to have fun and this is what Mrs. Kay organised this trip for. His chaos is their fun and Mrs. Kay realised this a long time ago. Mrs. Kay teaches very personally, letting children link arms and snuggle up to her on the bus, she knows there is no needs for them to be educated because they wont get a job anyway. ...read more.

The end is sad but realistic. In my opinion Briggs is afraid that the children won't have any respect for him and more importantly the head master. What Briggs doesn't realise is that by being more like a Mrs. Kay he will gain the respect of the children, instead of being the "military dictator" he is showing them slides and making them learn, he should be more fun, more friendly and more motherly. After all the kids are off the bus and off home, the teachers go to the pub but Briggs "stays home marking". There would never be any easy answers to the problems that the students and pupils have but as Mrs. Kay said; "A day out won't change anything" January 2003 Page 7 Our Day Out This play was and incredibly informative about the problems other children face and to be completely honest made me fell much humbler about my backgrounds and how lucky I am to be where I am, how I am and what I am. The views Willy Russell put forward are very important ones and although I'm not deprived of anything especially not education, I found it hard to realise that some children cannot read or write, remarkably children in England cannot read or write. Willy Russell themes on deprivation were quite hard hitting too, these children probably only have two pairs of clothes, no proper school equipment and sad as it may seem no love. Overall Willy Russell did exceedingly well to get his views/themes across and the unfortunate thing is 20 years on from these problems there still evident in the 21st Century. ?? ?? ?? ?? ...read more.