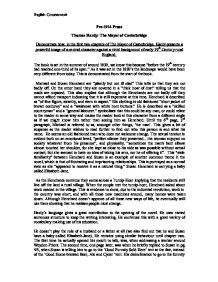 the mayor of casterbridge

Pre-1914 Prose Thomas Hardy: The Mayor of Casterbridge Demonstrate how, in the first two chapters of The Mayor of Casterbridge, Hardy presents a powerful image of a central character against a vivid background of early 19th Century rural England. The book is set in the summer of around 1830, we know this because "before the 19th century had reached one-third of its span." As it was set in the 1830's the landscape would have been very different from today. This is demonstrated from the start of the book. Michael and Susan Henchard are "plainly but not ill clad" This tells us that they are not badly off. On the other hand they are covered in a "thick hoar of dust" telling us that the roads are unpaved. This also implies that although the Henchards are not badly off they cannot afford transport indicating that it is still expensive at this time. Henchard is described as "of fine figure, swarthy, and stern in aspect." His clothing is old fashioned "short jacket of brown corduroy" and a "waistcoat with white horn buttons." He is described as a "skilled countryman" and a "general labourer." symbolises that this could be any man, or could relate to the reader in some way and makes the reader look at this character from a different angle as if we might know him rather than seeing him as Henchard. ...read more.

We know instantly that Susan regrets the whole ordeal as 'she went out of the tent sobbing bitterly.' We are persuaded that Michael really wants to rid of his wife, when, on pages 8/9/10, he pursues his selling, until finally a bidder puts the money on the table and the exchange is made. Hardy shows that Henchard really is a malicious man, without any thought to his responsibility. We know this by the language used; he talks badly of Susan; 'I married at 18, like the fool that I was; and this is the consequence of 't.' we finally see the back of Susan, telling us that the exchange was true and complete. Henchard was very open about his marriage life while he was in his drunken state. He seemed to feel that marriage is the biggest mistake a man can make and that it is for fools. At the scene of the auction, the only people who seem to have some reverence for the sacred bond of matrimony are Susan and the furmity lady. Susan is the only person who tries to put the whole state of affairs to a halt. The furmity tries to reassure Susan that Michael is just under the influence of drink. 'Others just encourage Michael, 'there's them that would do that,' this shows that they find such an offer common. ...read more.

The opening chapters are probably among the most important parts of the story. By the terrible action of the wife sale, Henchard goes on to make himself a better man by vowing never to touch another drink the years he had lived. As he grows older, he has achieved himself a high position in life and his community. Susan did not change; she was still the same person, quiet, faint still she was almost invisible. This makes it her most crucial part to the novel. In conclusion to how Hardy presents a powerful image of a central character against a vivid background; although people tried to keep things as they always had been the passage of time is unstoppable and the victims of it are the people. Weydon Priors resources had gradually gone to the towns and cities and it had continued to decline. Hardy's view was that time had been unkind to Susan who had a troublesome and disturbing life. The most successful person at stopping the progress of time was Henchard who managed to keep him and the town of Casterbridge the same for 20 years. His downfall can also be related to fate rather than time but, personally, I realised that time was the main problem. Time and mostly fate however eventually dragged him down too as he was unable to adapt to changes in rural commerce. For the most part time is portrayed as an unstoppable force that preys on the people around it. ?? ?? ?? ?? English Coursework ...read more.