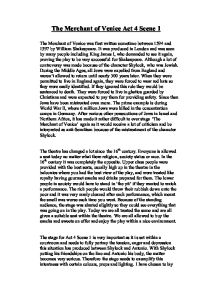 The Merchant of Venice Act 4 Scene 1 The Merchant of Venice was first written sometime between 1594 and 1597 by William Shakespeare. It was produced in London and was seen by many people including King James I, who demanded to see it again, proving the play to be very successful for Shakespeare. Although a lot of controversy was made because of the character Shylock, who was Jewish. During the Middle Ages, all Jews were expelled from England and weren't allowed to return until nearly 300 years later. When they were permitted to live in England again, they were forced to wear red hats so they were easily identified. If they ignored this rule they would be sentenced to death. They were forced to live in ghettos guarded by Christians and were expected to pay them for providing safety. Since then Jews have been mistreated even more. The prime example is during World War II, where 6 million Jews were killed in the concentration camps in Germany. After various other persecutions of Jews in Israel and Northern Africa, it has made it rather difficult to ever stage 'The Merchant of Venice' again as it would receive a lot of criticism and be interpreted as anti-Semitism because of the mistreatment of the character Shylock. The theatre has changed a lot since the 16th century. Everyone is allowed a seat today no matter what there religion, society status or race. In the 16th century it was completely the opposite. Upper class people were provided with the best seats, usually high up in the theatre in the balconies where you had the best view of the play, and were treated like royalty having gourmet snacks and drinks prepared for them. ...read more.

The first lines of Act 4 Scene 1 are very important as we see the Duke showing sympathy towards Antonio. He explains the horror that Shylock has created and that he cannot do anything about it except persuade Shylock to forgive and forget. Antonio understands that there is little that can be done and that it is very unlikely that Shylock will back down as he is a very merciless man. We see these emotions in lines 3-6 where the Duke says 'I am sorry for thee. Thou art come to answer a stony adversary'. This perhaps creates a bond, a friendship, a trust between the two men as Antonio is relying on the Duke to somehow rescue him from the clutches of Shylock's twisted and evil mind. We see Antonio saying 'He stands obdurate and that no lawful means can carry me out of his envy's reach', but inside he is hoping that he can be freed and forgiven by Shylock. All of this is happening before Shylock enters so Antonio can show his feelings towards the Duke without revealing any weaknesses that Shylock could pick up on and tease about. Shylock's character throughout the scene changes a lot. We see many different emotions from him and there are times where he really makes us feel angry and shocked. Other times he makes us, in a way, feel sympathy towards him when he spirals out of control and cannot save himself. Shylock enters the scene very cocky and arrogant as if he has already committed the deed on Antonio and quickly starts to make his arrival well known. ...read more.

As he slowly makes his way out of the court, he will make brief eye contact with Antonio and see a happy and relieved man. Shylock doesn't understand why he has been interpreted as the villain in this situation. After years of being mistreated by Antonio and other Christians, he feels that he has a good right to his actions and now he is being punished for it. Outside of the court Shylock will look down and see Christian hands waving in front of him. At this point Shylock will not be able to contain his emotions and break down into tears on the streets of Venice. To conclude Act 4 Scene 1, we know that Shylock lost the trial and Antonio won. Shylock had entered with the intention of claiming a pound of flesh, but didn't succeed. Antonio must feel relieved for getting out of this with his bosom and feel great happiness towards Doctor Balthazar (Portia). The intended outcome for Shylock didn't happen and he had no idea about there being a possible loop hole in the bond. Therefore he has suffered the consequences and learned that he shouldn't be so evil just to get his own back on Antonio. We know that Shylock has been mistreated by Antonio and he wants to get revenge but he should stay calm and ignore it. He should have obeyed his religion and now he has been forced to leave it. Overall, Portia has succeeded the most as she has successfully completed her plan. She has kept her disguise well and cracked the mind of Shylock. Now Shylock is left as a Christian unable to enter any Synagogue ever again, just because of his revengeful plan towards Antonio. ...read more.