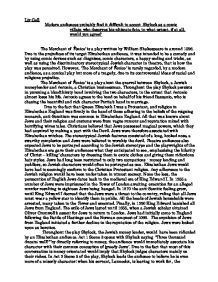 The merchant of venice, Modern audiences probably find it difficult to accept Shylock as a comic villain who deserves his ultimate fate, to what extent, if at all, would you agree?

Liv Gell Modern audiences probably find it difficult to accept Shylock as a comic villain who deserves his ultimate fate, to what extent, if at all, would you agree? 'The Merchant of Venice' is a play written by William Shakespeare in around 1596. Due to the prejudices of its target Elizabethan audience, it was intended to be a comedy and by using comic devices such as: disguises, comic characters, a happy ending and tricks, as well as using the discriminatory stereotypical Jewish character in theatre, that is how the play was perceived. However, 'The Merchant of Venice' is rarely regarded, by a modern audience, as a comical play but more of a tragedy, due to its controversial ideas of racial and religious prejudice. 'The Merchant of Venice' is a play about the quarrel between Shylock, a Jewish moneylender and Antonio, a Christian businessman. Throughout the play Shylock persists in pursuing a bloodthirsty bond involving the two characters, to the extent that Antonio almost loses his life. Antonio agrees to the bond on behalf of his friend Bassanio, who is chasing the beautiful and rich character Portia's hand in marriage. Due to the fact that Queen Elizabeth I was a Protestant, and religion in Elizabethan England was firmly in the hand of those adhering to the beliefs of the reigning monarch, anti-Semitism was common in Elizabethan England. ...read more.

offer of six thousand ducats in order to see his rival suffer, evidently showing that Shakespeare wanted to make Shylock look as demon-like as possible. Liv Gell However, in "The Merchant of Venice" William Shakespeare created more than just a stereotypical Jewish character; he produced a temperament within Shylock that was capable of questioning an Elizabethan audience's prejudices - a character with the ability to go against Elizabethan norms. Shylock's famous speech in Act 3 Scene 1 queries Elizabethan's beliefs between Christians and Jews, appealing to the audience to view him as an equal human being. The speech begins with "To bait fish withal..." and includes the well-known lines: "If/ you p***k us, do we not bleed? If you tickle us, do we not laugh? / If you poison us, do we not die? And if you wrong us, shall we not revenge?" By asking these questions, Shakespeare forces his audience to acknowledge the fact that despite religious beliefs, we are all physically the same. Furthermore, in Act 2 Scene 5 there is additional evidence that Shakespeare set out to create more than just a miserable Jewish character; when Shylock wants to shelter his daughter, Jessica, from the abundant lifestyle of Christians, suggesting he is a good, compassionate father figure. ...read more.

However, after studying Shylock in greater detail I now react sympathetically towards his situation and consider him to be a very cleverly thought out character. Due to the fact that Shakespeare frequently indicates towards a more complex side of Shylock's character - rather than just a stereotypical Elizabethan Jew - implies to me that he is trying to build Shylock's position as a victim in the play, in spite of the controversy he would have encountered at the time. Liv Gell In my opinion Shakespeare fully intended to create Shylock's contentious character as such a realistic portrayal of the minority of English society - that was forced to fight against the shameless prejudices of the majority. Finally, I think that "The Merchant of Venice" has remained such a popular play to this day, for the reason that it is not a typical Elizabethan anti-Semitic play, but a meaningful presentation of medieval prejudices in which the audience are encouraged to make their own decisions about each character. Furthermore, a lot of current issues involving r****m and other prejudices are featured in the play, but unlike most present sources, viewers are invited to see both sides of the matter. How Shakespeare deals with the circumstances and shows neither side of the prejudice as inferior encourages audiences to reconsider their beliefs and it promotes equality. ...read more.