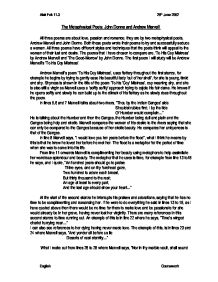 The Metaphysical Poets: John Donne and Andrew Marvell All three poems are about love, passion and romance; they are by two metaphysical poets, Andrew Marvell and John Donne. Both these poets wrote their poems to try and successfully seduce a woman. All three poems have different styles and techniques that the poets think will appeal to the woman of their l**t and desire. The poems that I have chosen to compare are, 'To His Coy Mistress' by Andrew Marvell and 'The Good-Morrow' by John Donne. The first poem I will study will be Andrew Marvell's 'To his Coy Mistress'. Andrew Marvell's poem 'To His Coy Mistress', uses flattery throughout the first stanza, for example he begins by trying to gently ease his beautiful lady 'out of her shell', for she is young, timid and shy. Shyness is shown in the title of the poem 'To his 'Coy' Mistress', coy meaning shy, and she is also still a virgin so Marvell uses a 'softly softly' approach trying to cajole his fair dame. He knows if he opens softly and slowly he can build up to the climax of his flattery as he slowly does throughout the poem. In lines 5,6 and 7 Marvell talks about two rivers, "Thou by the Indian Ganges' side Shouldst rubies find; I by the tide Of Humber would complain..." He is talking about the Humber and then the Ganges, the Humber being dull and plain and the Ganges being holy and exotic. Marvell compares the woman of his desire to the rivers saying that she can only be compared to the Ganges because of her exotic beauty. He compares her uniqueness to that of the Ganges. In line 8 Marvell says, "I would love you ten years before the flood", what I think he means by this is that he knew he loved her before he met her. The flood is a metaphor for the period of time when she was to come into his life. ...read more.

The central image in 'The Good-Morrow' and the one that gives the poem its title, is, as I have mentioned above, that of the two young lovers waking up into a new world of love. It is a brave image, and there is much that is brave and exciting about this poem. Notably, the courage with which Donne seeks to acknowledge the past and the future, as well as the present reality of their love, and the ambition which leads him to include so wide a range of feeling and mood in the short space of twenty-one lines. How far the courage and the ambition are eventually justified by the success of the poem as a poem, that is, a piece of art and moving account of human trials and tribulations, is, however an open question. The first few lines of 'The Good-Morrow' are often cited, quite justly, to illustrate the remarkable directness of Donne's poetic voice, "I wonder by my troth, what thou, and I Did till we lov'd? Were we not wean'd till then? But suck'd on countrey pleasures, childishly? Or snorted we in the seaven sleepers den? T'was so;" John Donne has two related tasks here: firstly, to recognise the fact that both he and his lover have loved before, "what thou and I did..." and secondly, to insist that what they are now discovering together is at last the real world of love, and not merely another realm of 'fancies'. It would be dishonest to ignore the past; indecent to dwell on it unduly. Donne accepts it, as he must, but without alarm, and deprives it of any power to harm them by converting it into a series of comic affairs marked by hopeful enthusiasm and graceless incompetence in about equal measure. The vocabulary is at once affectionate and dismissive: "not wean'd", "suck'd", "childishly", "snorted". The bungled "countrey pleasures" of the past, which might have become a barrier between them, provide instead an opportunity for them to express their love in shared laughter. ...read more.

He is saying that when you are dead you are in your grave, quite a private and fine place, for a dead person anyway, but no one can make love there, so they must do it, if they are going to, while still alive. The third technique that he uses in the final stanza is imagery. He tries to get the lady to picture herself in the embrace. He tries to use passionate images that could 'get her going', as it were. The best example I can pick out from the final stanza is in lines 41 and 42, this is the strongest image, and it says, "Let us roll all our strength and all Our sweetness up into one ball..." It is an image of the two of them making love with all their strengths and sweetness connected. This image may make the lady feel she would want to try it now that she can see it in her head. Donne doesn't seem to have the confidence that Marvell does. Through the middle section of his poem 'The Good-Morrow', it appears that he has the confidence but the doubt creeps into his mind when he looks forward to the future, and all his built up confidence is lost. I also thought that Donne's poem was difficult to comprehend as a poem to 'woo' a lady. It was a poem more directly linked to the trials and tribulations of love itself rather than the initial attracting of a mate. I also found Andrew Marvell's poem 'To His Coy Mistress' the easiest to understand in the sense of a love poem, so maybe that would make it easier for the receiving lady to understand it also. It uses the most clich�s and innuendo, and has some of the best 'wooing' techniques of the two poems that I have studied. So in conclusion Marvell's poem, 'To His Coy Mistress', is the best love poem from the two metaphysical poets, John Donne and Andrew Marvell. Alex Fox 11.3 26th June 2002 English Coursework ...read more.