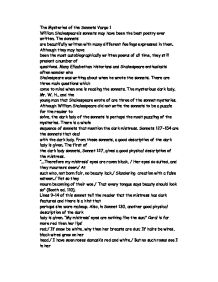 The Mysteries of the Sonnets Vargo

The Mysteries of the Sonnets Vargo 1 William Shakespeare's sonnets may have been the best poetry ever written. The sonnets are beautifully written with many different feelings expressed in them. Although they may have been the most autobiographically written poems of all time, they still present a number of questions. Many Elizabethan historians and Shakespeare enthusiasts often wonder who Shakespeare was writing about when he wrote the sonnets. There are three main questions which come to mind when one is reading the sonnets. The mysterious dark lady, Mr. W. H., and the young man that Shakespeare wrote of are three of the sonnet mysteries. Although William Shakespeare did not write the sonnets to be a puzzle for the reader to solve, the dark lady of the sonnets is perhaps the most puzzling of the mysteries. There is a whole sequence of sonnets that mention the dark mistress. Sonnets 127-154 are the sonnets that deal with the dark lady. From these sonnets, a good description of the dark lady is given. The first of the dark lady sonnets, Sonnet 127, gives a good physical description of the mistress. "...Therefore my mistress' eyes are raven black, / Her eyes so suited, and they mourners seem/ At such who, not born fair, no beauty lack,/ Slandering creation with a false esteem./ Yet so they mourn becoming of their woe,/ That every tongue says beauty should look so" (Booth ed. ...read more.

William Shakespeare was in contact with many women throughout his life. Therefore, there are many theories as to who the mysterious mistress is. The most popular name concerning the dark lady's identity is Mary Fitton. Mary Fitton was a maid of honor to Queen Elizabeth and was a mistress to William Herbet. "She was a lively lady who became the mother of three illegitimate children by different men, but afterward married richly and died very respectable." (Harrison 44). The only problem with Fitton being the dark lady is that she did not possess the dark features that Shakespeare so vividly described throughout his poetry. In addition to Fitton, another woman named as the dark lady as Mistress Davenant. Davenant was the "wife of an Oxford innkeeper, who is thought to have favored both Shakespeare and Southampton, and who was darkly lustrous, has also been mentioned as possibly 'the dark lady'." (Ballou ed vii). The author Ivor Brown believes that "The name of the Dark Lady has been written off as an insoluble problem by many scholars and further research and speculation has been dismissed as a futile waste of time and trouble"(196). Whether or not the reader knows the name of the dark lady is irrelevant. All one needs to know is that William Shakespeare had a mistress that he had very lustful feelings about. ...read more.

(Rowse 176). This excerpt tells the reader that the Fair Friend had very feminine features and was probably wealthy and of good social stature. Shakespeare never mentions throughout the sonnets exactly what the young man looks like (Palmer 123). Vargo 4 The identity of the young man is one of the great mysteries of the sonnets. The main candidate for his identity is again Henry Wroithesley, the earl of Southampton. Wroithesly had very feminine features and was also the subject of many dedications of Shakespeare's works. Also, his marital activities make it seem that he and Shakespeare may have been involved somehow. Southampton refused to marry Lady Elizabeth Vere, who was the grand-daughter of Lord Burghley. The other main candidate for the young man is again the earl of Pembroke. His reasons for being considered are very similar to that of Southampton. Pembroke had an unsuccessfully negotiated marriage between himself and Elizabeth Carey. It is very hard to conjecture the identity of the young man, perhaps it is not even necessary to know his identity. The identity of Shakespeare's dark lady, Mr. W. H. and the young man in the sonnets are three mysteries that may never by solved. William Shakespeare did not intend for his sonnets to become a puzzle for his readers to solve. To find a definite answer to the mysteries of the sonnets would be a long and trying, if not impossible task. Instead, it is best that the mysteries of the sonnets are left to the imagination to ponder. ...read more.