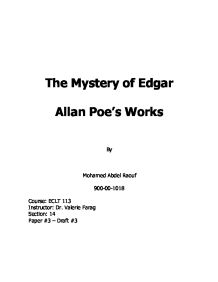 The Mystery of Edgar Allan Poe's Works By Mohamed Abdel Raouf 900-00-1018 Course: ECLT 113 Instructor: Dr. Valerie Farag Section: 14 Paper #3 - Draft #3 The Mystery of Edgar Allan Poe's Works. Outline Thesis Statement: Edgar Allan Poe is considered to be one of the greatest and most brilliant American writers in history. Many people considered him the first master of the short story form, and the father of the mysterious and the modern detective stories. Outline: I. An Introduction to Poe life and works. A. Due to Poe's great works, many writers were influenced by these works. II. The early life of Poe and how it affected his life. A. His parents died so Allan raised him up. B. Allan ill-treated him and this affected his life and works afterwards. C. Poe's education in England enriched his knowledge. D. Poe joined the University of Virginian and the army afterwards. III. What affected the works of Poe. A. Learning a lot of language enabled Poe from knowing different nations cultures and literature. B. Poe was good at the field of Art as well. C. Poe read to famous philosophers. IV. Analysis of the stories and poems of Poe. A. Poe was a talented writer. B. ...read more.

Poe early developed an interest in philosophy. Because he knew the German language, he was attracted to the philosophical thinking of the German philosophers. He knew about Kant, Hegel and Fichte (Campbell 12+). He drew ideas for his stories and poems from all the knowledge he had from the German philosophy. He also read to English philosophers as Bentham and Mill (Campbell 13). The works of Poe shows that Poe was a talented writer and a gifted poet. As an example to his great success is that his first volume of poetry "Tamerlane and Other Poems", which he have written when he was eighteen years old, is such a rare book now that a single copy worth two hundred thousand dollars (Wilson 1). Daniel Hoffman states that the writings of Poe demonstrates Poe's critical mind, his analysis of the structure and texture of poetry, the need for all details of diction and form to contribute to single effect (1). Poe was considered to have influence on the literature of twenty cultures and on fifteen major writers around the world (Hoffman 1). Poe's influence on European and American art has been extraordinarily wide. Poe had a short life and a few unfinished works; however, he possessed great originality and imagination. ...read more.

However, unlike the other tales, which involve murders of women, "The Purloined Letter" presents only petty thievery and trickery of the crime. The Prefect of the Parisian Police actually knows the thief, but the letter had to be found in order to protect the honor of a lady being blackmailed. The police department searches for the letter, but it appears that no one could found it. So the Prefect asks Dupin for help. And as usual, Dupin find the clue to this thievery and get the letter. Afterwards Dupin explains what has been the reason that led him to that solution (The Purloined Letter 1). These evidence and examples shows that Edgar Allan Poe was the inventor of the detective short story and his main character, "Dupin", was the prototype that all the subsequently writers used him and invented their characters upon as "Sherlock Holmes". And this success was a product of his hard work and also because of his talents. Edgar Allan died on Sunday, October 7, 1849 at the age of fourty. Poe's spent his last days in a New York hospital, after taking an alcoholic overdose, became unconscious, suffered delirium tremens, fell into a coma and died four days later. Poe's life was not very long, however during this short lifetime, he enriched the American Culture and all the world culture with many stories and poems that are still discussed and criticized by people all around the world. Poe (Meyers 255). ...read more.