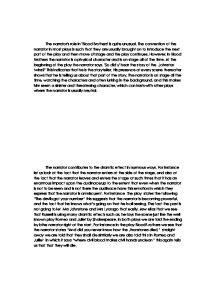 The narrator's role in 'Blood Brothers' is quite unusual. The narrator is on stage all the time, watching the characters and often lurking in the background, and this makes him seem a sinister and threatening character,

The narrator's role in 'Blood Brothers' is quite unusual. The convention of the narrator in most plays is such that they are usually brought on to introduce the next part of the play and then move offstage and the play continues. However, in Blood Brothers the narrator is a physical character and is on stage all of the time. At the beginning of the play the narrator says, "So did y' hear the story of the Johnston twins?" This indicates that he is the storyteller. His presence at every scene thereafter shows that he is telling us about that part of the story. The narrator is on stage all the time, watching the characters and often lurking in the background, and this makes him seem a sinister and threatening character, which contrasts with other plays where the narrator is usually neutral. The narrator contributes to the dramtic effect in numrous ways. For instance let us look at the fact that the narrator enters at the side of the stage, and also at the fact that the narrator leaves and enters the ...read more.

Throughtout the play we see that the narrator gives this feeling as if he is some supenatural being. Another way in which the narratorgives a dramtic effect is of when he talks in direct speech to the audinace which makes them feel as if he is one of them, it feels as if they are apart of this thus keeping them informed, and in the know.Conversely the narrator is speaking in a Liverpuddlian accent this renforce the effect if making the audinace feel as if he is one of them and the fact that the same problem occurs in their city, and the it goes on in their day to day lives.We can also see the fact that the narrator is starting to be used as Russels mouth piece.We can tell of this because he is now protraying a message which will be fullfilled at the end of the play. The narrator is a vital piece of he play and a fundelmentle part of the dramatic effects of the play because without him the ethical message of the whole play would be in pieces. ...read more.

Allow me to take your attention to the "born" which has also used in such a manner that the audiance is taken back by it. The word "born" in this context brings about the sence of this evil being awakened and the fact the this immoral-being is on the rise."Happy are y cointent at last ? wiped what happened forgotten the past... no one gets off without a price being paid."From this alone we see the emince power in the play and the fact the it contains powerful and destructive dramatic effects. This statement provides the effect the past has no forgotten them and the fact it is coming back to get them. Again this is said by the narrator who now is forming into Mrs Johnson's point onwards. We can also see that the Englished used within the play is far from standered English; but instead one could say theat it was urban,common,northern or colloquial English. This type of English is commonly used within that city and area,which is always spoken in the Liverpuddlian accent. This again is one of many dramtic effect used in the play to convey its moral message. ...read more.