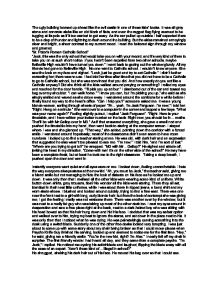 The ugly building loomed up ahead like the evil castle in one of those kids' books. It was all grey stone and concrete slabs like an old block of flats, and even the ragged flag flying seemed to be tugging at its pole as if it too wanted to get away. As the car pulled up outside I half expected there to be a clap of thunder and lightning to flash around the building. But the skies remained annoyingly clear and bright, a sheer contrast to my current mood. I read the battered sign through my window and groaned. 'St. Peter's Roman Catholic School' "Jack, this was the only school that would take you on with your record, and it's very kind of them to take you on at such short notice. If you hadn't been expelled from two other schools, maybe Belleville High wouldn't have turned you down." I went back to gazing out the window glumly. All my friends had gone to Belleville High. No one went to Catholic school. I wouldn't know anyone. She saw the look on my face and sighed. "Look, just be good and try to act Catholic." I didn't bother correcting her; there was no use. I had told her time after time that you did not have to be a Catholic to go to Catholic school, but she was convinced that you did. And how exactly do you act like a Catholic anyway? Did she think all the kids walked around praying or something? I rolled my eyes and reached for the door handle. "I'll pick you up at four." I clambered out of the car and tossed my bag over my shoulder. "I can walk home." "I know you can, but I'm picking you up," she said as she simply smiled and waved as she drove away. I wandered around the corridors for a while before I finally found my way to the head's office. ...read more.

For about two seconds. "Why do you always carry all your stuff around with you?" "Because I never found my locker!" "Your locker? Oh, you should have said. It's right there, next to mine." I stopped for a moment and turned to face him. Was he serious? I had been at the school three whole weeks, and he'd seen me carrying all my stuff around but never bothered to mention that he knew where my locker was? "That one, right there," he repeated, walking over and tapping on one of the lockers. The locker sprang open to reveal a clean, empty space. I felt like hugging someone. With genuine relief, I dumped all the books I was carrying inside, followed by most of the contents of my bag. "Come on Jack, quickly, we have French now. " I groaned as we walked down the corridor that led to the language block, and he stopped suddenly and looked across at me. "I scare you, don't I?" he asked, looking amused. "What? Um, no. You don't scare me." ...Much. "But you think I'm weird. And annoying. And you're sick of me hanging around you the whole time." He spoke calmly and matter-of-factly, but I still felt bad because his words hit so close to the truth. I sighed and decided to be honest. "Well, okay. I do think you are a little weird. And annoying. Sometimes. Maybe." He shrugged and thrust his hands deeper into his pockets, looking upset suddenly. "I'm sorry..." was all I could say. "The thing is, I thought you were different, Jack. You turned up, dressed the same way I dress outside of school - I thought you were better than they were. But you treated me just the same." He said all of this staring straight into my eyes. Way to make someone feel low. Finally, he broke our gaze and started walking faster. ...read more.

The garden was huge and small electric lights had turned on automatically as we walked outside, lighting up a pool. Olivia got us a drink - girl drinks. The sort of low-alcohol fancy stuff that is almost impossible to get drunk on. My head was thumping, due to the extremely loud music. These people were a lot nicer than I had thought, and I began opening up and joking around with a group, including Olivia. It was 11:30pm, and my mum was coming to pick us up. I was quite embarrassed to have to show Alex our car; it wasn't the greatest, and mum always kept it in the garage, so he hadn't really seen it before. It was a dusty old blue Ford with a deep dent down the left side, and it had an odd stench too. We clambered into the car, listening to the old bag rant on about why alcohol "was against the law for children for a reason". As we pulled up outside Alex's house, I was a bit surprised - it was a lot smaller than mine. The driveway was overgrown and littered with broken bottles and other garbage. It was only a few hundred meters down the road from mine, but it was like another world to me. Now I know why we met at my house always! Still a bit dazed, I said goodbye to Alex, and as soon as I arrived home, I had never been so pleased to see that red wooden door with chips taken out of it. I scrambled up the stairs as fast as I ever could, and I was that exhausted, before my mum could come and say goodnight to me, I was fast asleep. I had a lovely dream, I can't remember it, but it was really quite a lovely one. Before I knew it, I had woken up, and for the first time in a while, I thought to myself "my life really isn't all that bad." ...read more.