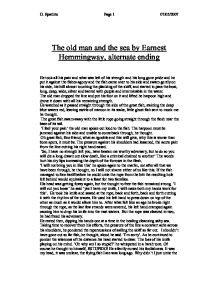 The old man and the sea by Earnest Hemmingway, alternate ending He took all his pain and what was left of his strength and his long gone pride and he put it against the fishes agony

The old man and the sea by Earnest Hemmingway, alternate ending He took all his pain and what was left of his strength and his long gone pride and he put it against the fishes agony and the fish came over to his side and swam gently on his side, his bill almost touching the planking of the skiff, and started to pass the boat, long, deep, wide, silver and barred with purple and interminable in the water. The old man dropped the line and put his foot on it and lifted he harpoon high and drove it down with all his remaining strength. He watched as it passed straight through the side of the great fish, staining the deep blue waters red, leaving swirls of maroon in its wake, little ghost fish sent to mock me he thought. The great fish swam away with the little rope going straight through the flesh near the base of its tail. 'I feel your pain' the old man spoke out loud to the fish. The harpoon must be jammed against his side and unable to come back through, he thought. Oh great fish, fine friend, what an ignoble end this will give, why this is worse than bone spurs, it must be. The pressure against his shoulders had lessened, the acute pain from the line cutting his right hand eased. 'So, I have no strength left you, have beaten me worthy adversary, but to do so you will die a long drawn out slow death, like a criminal chained to another' The words hurt his dry lips increasing the depth of the furrows in the flesh. 'I will not bring you in like this' he spoke again to the marlin, not after all that we have been through, he thought, no I will not shame either of us like this. If the fish managed to free itself before he could untie the rope from the bitt the resulting hole left behind would equivalent to a feast for two families. ...read more.

'the fish!' he croaked jumped up, his head spinning around to locate the fish, when he saw it swimming along unconcerned at the private battle aboard the skiff, the relief that washed over him was like a healing balm, a balm that melted away as he fumbled for the line realising that it had slipped from his shoulders. His cold and sleepy hands nearly dropped the line, but he managed to flounder around until his right hand grappled and gripped at the line, then his slower left hand finally found purchase and finished the job of adjusting the line so it was snug against his shoulder blades. He gazed around at the stars realising that he was heading in the direction of home. Well my fine friend, we best end this soon or the waters will get too shallow, and you will scrape your fine scales, he chuckled silently casting his gaze around searching for his fish. He had surfaced again in the night; it must be getting close to an ending the old man thought. It'll soon be time for the home run, where's that water; he reached over feeling for his bottle. Sipping slowly Santiago glimpsed a shape moving around the skiff. 'What's that?' he started, more quietly now he said, 'that's a snub nose, no, no there are two' he said as he spotted a second fin gliding towards the boat. The circled the boat coming at it from different directions, then one changed course heading towards the fish. He must be leaving blood trails calling out to the shark, diner time come and get me, thought the old man. As the snub nose headed towards the fish the old man started beating the surface of the water with an oar. He screamed at them in a cracked and wasted voice 'here you bastardos, here, leave him alone, you are nothing but unworthy scavengers, brainless useless scum' he continued to beat the ocean erratically , splashing and churning up the expanse ...read more.

with that he turned to the most superstitious member of the village and said 'that is right isn't, it that's what the old stories tell us?' The old man stared at the boy for a second then said 'yes they will have shared courage therefore their spirits would have mingled' in a slow and halting voice, then stronger 'yes he is right! This great marlin, noble marlin is as Santiago' The boy turned back towards the fish, 'then we have to save this fish, we should revere such a miracle not haste its passing. Would you club Santiago's body if it were that in front of you? The crowd denied this as a group; hurt a member of their community? Never. Right said the boy in a more confident tone 'lets get him to the water, come on, I cant move him on my own' the others started to help, all the while encouraged by the boy who was not a boy anymore 'gently, careful now' 'look at that wound, it is very bad, but one as strong as this will heal' silently to himself, he prayed that it would heal. They got the fish to the water before they noticed the hole in its lip where the hook had finally ripped away. The boy checked the unnaturally still fish over for ropes, lines and hooks then trying to get a quick look to assess the condition of the fish. All the while the fish stayed still. The boy whispered 'goodbye, and thank you, Joe DiMaggio rules' The fish turned its kingly head towards the boy, and with the flick of a tale was gone, going beneath the surface as soon as it could. The crowd thinned until it was just the boy watching, alone, his eyes all bleary from unshed tears; just as he turned he thought he saw the glistening body of the majestic fish leaping through the air. But when he turned back to see clearer, there was nothing there. ?? ?? ?? ?? D. Epathite Page 1 07/05/2007 ...read more.