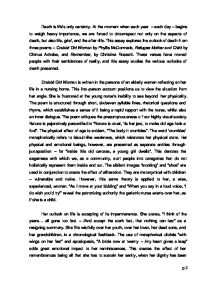 The Outlook of Death in three poems (Poetry Anthology comparison)

Death is life's only certainty. At the moment when each year - each day - begins to weigh heavy importance, we are forced to circumspect not only on the aspects of death, but also life, grief, and the after-life. This essay explores the outlook of death from three poems - Crabbit Old Woman by Phyllis McCormack, Refugee Mother and Child by Chinua Achebe, and Remember, by Christina Rossetti. These verses have moved people with their semblances of reality, and this essay studies the various outlooks of death presented. Crabbit Old Woman is written in the persona of an elderly woman reflecting on her life in a nursing home. This first-person account positions us to view the situation from her angle. She is frustrated at the young nurse's inability to see beyond her physicality. The poem is structured through short, six/seven syllable lines, rhetorical questions and rhyme, which establishes a sense of it being a rapid rapport with the nurse, whilst also an inner dialogue. The poem critiques the presumptuousness of our highly visual society. Nature is pejoratively personified in "Nature is cruel, 'tis her jest, to make old age look a fool". The physical effect of age is evident, "The body it crumbles". The word 'crumbles' metaphorically refers to biscuit-like weakness, which reinstates her physical state. Her physical and emotional beings, however, are presented as separate entities through juxtaposition - for "inside this old carcass, a young girl dwells". ...read more.

Death and loss are foreshadowed from the outset, in "a son she would soon have to forget.". This is an exception, as "Most mothers had long since / ceased to care", which highlights the heart-wrenching loss this mother in particular is about to face. "No Madonna and Child could touch that picture of a mother's tenderness" symbolizes their relationship. These paintings were famous for their illustration of the dimpled baby looking into the eyes of a smiling mother, her golden tendrils gently caressing his cheeks. This comparison, however, implies that the Madonna in the painting has not been forced to watch her child verge on death, she has not selflessly abandoned her own pain to ease her child's. The hard consonants 't' in 'touch' and 'tenderness' followed by the fricative consonants in "son she soon" shape a contrast, giving the effect of a summary, a closing of curtains, a resignation. The decrepit environment is vividly drawn through the use of dysphemisms. The surroundings are described using clauses, enabling the reader to stack up a series of adjectives to mold an image. There is a sense of pungency and pervasion in "air was heavy with odours". The use of the adjective 'heavy' to describe air is oxymoronic, which only accentuates the consuming power of the odour. The use of synaesthesia is crucial to the intensity of the descriptions. ...read more.

She brings up grievance - and her desire for him not to be sad without her is apparent with her use of imperatives, "Better that you forget and smile, than that you should remember and be sad." Her view on their relationship furthering is not discussed, she only mentions that she shall lapse into an eternal quietude, "Gone far away into the silent land; When you can no more hold me by the hand.". This euphemistically describes the cold, saddening permanence of never, ever being in contact with one passed away. She does not slip in any comforting words of any future meeting in a higher place, but presents herself as something gone and gone forever. This is, however, only one of many views on life after death. In closing, the way in which an individual approaches death is dependent on their background, their culture, their lifestyle, their family, their situation. The authors have expressed their experiences through the conventions of poetry. It may be the anguish from watching a loved one die through famine, poverty, war, and catastrophe. Or it could be the physical assumptions we make of an old person, their depth imperceptible. Then there is the fear and irresolution of what lays beyond, and the issue of bereavement. In truth, these poems all capacitate one thing - there is no answer. The finality of life is more obscure than the miraculous birth of it. p.2 ...read more.

Comparisons between the three poems have been shown by the student, but they could have been presented in a clearer format. The author has decided to talk about each poem individually. By doing it this way, the readers will get ...

Comparisons between the three poems have been shown by the student, but they could have been presented in a clearer format. The author has decided to talk about each poem individually. By doing it this way, the readers will get to understand each poem, but might not be able to see the similarities and difference between the poems as clearly. A better way to do this would be to focus on one aspect of all three poems in each paragraph. For example, the author might talk about the point of view of each poem in one paragraph and then go on to talk about the tone in the next one. This will enable to get a better picture of how each poem compares to the others. Nevertheless, the author has answered the question.

The writer has been able to pick up the important elements of the poems and the poetic devices used within each one. A lot of evidence from the poems has also been included in the essay, showing that the student understands the poems thoroughly. The judgements made out of the evidence are quite suitable with reasons being given. However, it would be better if more evidence is given, and the student should remember that there should be at least an evidence for every point made, no matter how obvious it seems. The conclusion is appropriate and very well written, since it sums up all the points that has been made in the essay.

The writerÃ¢â‚¬â„¢s spelling, grammar and punctuation are fine. Good use of vocabularies has been shown, including a wide range of words and names of poetic techniques. However, the introduction could have been more concise, because the function of an introduction is to tell the reader what the essay is going to be about and get to the point quickly. A better start could have been used for some of the paragraphs, because it would help the reader understand what the writer wishes to talk about better. Another advice would be to integrate the quotations into the sentences to make the essay flow more smoothly.