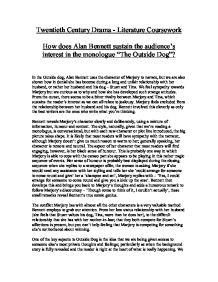 Twentieth Century Drama - Literature Coursework How does Alan Bennett sustain the audience's interest in the monologue "The Outside Dog"? In the Outside dog, Alan Bennett uses the character of Marjory to narrate, but we are also shown how in denial she has become during a long and unfair relationship with her husband, or rather her husband and his dog - Stuart and Tina. We feel sympathy towards Marjory but are curious as to why and how she has developed such strange attitudes. From the outset, there seems to be a bitter rivalry between Marjory and Tina, which sustains the reader's interest as we can all relate to jealousy. Marjory feels excluded from the relationship between her husband and his dog. Bennett involved this cleverly as only the best writers are the ones who write what you're thinking. Bennett reveals Marjory's character slowly and deliberately, using a mixture of information, humour and context. The style, naturally, given that we're reading a monologue, is conversational, but with each new character or plot line introduced, the big picture takes shape. It is likely that most readers will have sympathy with the narrator, although Marjory doesn't give us much reason to warm to her; generally speaking, her character is remote and neutral. The aspect of her character that most readers will find engaging, however, is her black sense of humour. This is probably one way in which Marjory is able to cope with the cameo part she appears to be playing in this rather tragic sequence of events. ...read more.

She seems distant, remote and unconnected at all times, particularly when he's 'carrying on' as she puts it. Even this, typically connecting human pursuit, is rendered ordinary, mundane and unwelcome. Of course, the marriage wasn't always unhappy; Marjory reminisces about lovely evenings together, although, they were often interrupted by Stuart having to 'walk the dog'; this could possibly of been her metaphor for finding a new victim. Fairly soon into the narrative we are given reason to be suspicious about Stuart's activities, and it's this continuous suspense that again grips the reader. Insights into the marriage mixed with slues as to what his nights out walking the dog might really entail. Even when he returns, sometimes after midnight, and washes his clothes it's pretty clear from her choice of words that she suspects him of wrong-doing. Bennett also introduces role-play between husband and wife. She asks whether she's safe to go to the library; he says don't go over any waste ground, but you get the feeling that they both know exactly what's going on, although it's unsaid. The fact that she asks his advice comes as a bit of a surprise, given that they both know what he's up to. Bennett has now established the two main areas the reader inhabits: Marjory's world, and the marital world, with the outside world occasionally crashing in. Bennett now increases the drama by introducing the Police presence, and that the house is about to take a visit. ...read more.

It is as if her world has actually been violated and a sense of panic comes over her; she even 'sneaks' into her own house to put the slacks in a bin bag ready to dispose of them. The reader is drawn to the brilliantly co-timed acquittal and significant discovery. Finally, in between having s*x twice with him, she goes out into the yard and puts the soiled slacks back under the kennel, with Bennett giving the reader one final choice to make. Why did she do it? The final ambiguity of why Marjory decided to put the evidence back, leaving it undiscovered, is left for the reader to decide. Given that Marjory is the main/only character and the whole story is shot through the prism of her life, it is fair to say that her qualities, views, feelings are what drives the story and hold your attention. That she is expressing confidential information is wonderful, making the reader feel 'in on it'. That she is lonely, vulnerable and despairing will be obvious, but our ability to sympathise is less so. Marjory holds the key to our enjoyment of this piece and the methods and techniques by which Bennett brings the characters and plot alive are varied. If I had to choose three main aspects of why I enjoyed this piece so much, they would be the humour, the dramatic timing of each new twist and Marjory's deadpan delivery. ...read more.