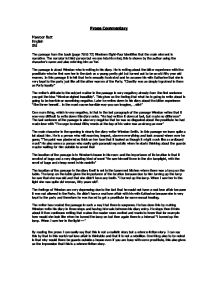 The passage from the book (page 70 t0 72) Nineteen Eight-Four identifies that the main element is narrative. The narrator is third person but we see into his mind, this is shown by the author using the character's name and also referring him as 'he'.

Prose Commentary Masroor b**t English IB1 The passage from the book (page 70 t0 72) Nineteen Eight-Four identifies that the main element is narrative. The narrator is third person but we see into his mind, this is shown by the author using the character's name and also referring him as 'he'. The passage is about Winston who is writing in his diary. He is writing about the bitter experience with the prostitute who he first saw her in the dark as a young pretty girl but turned out to be an old fifty year old women. In this passage it is felt that he is s******y frustrated and he accuses his wife Katharine that she is very loyal to the party just like all the other women of the Party. "Chastity was as deeply ingrained in them as Party loyalty" The writer's attitude to the subject matter in the passage is very negative; already from the first sentence you get the idea "Winston sighed inaudibly". ...read more.

nostrils" The location of the passage in the diary itself is set in the basement kitchen where there was a lamp on the table. The lamp on the table gives the importance of the location because due to him turning up the lamp he saw that she was old and that she didn't have any teeth. "I turned up the lamp. When I saw her in the light she was quite old woman, fifty years old". The feelings of Winston are very depressing due to the fact that he could not have a real love affair because it was not allowed in the Party. He didn't have a real love affair with his wife Katharine because she is very loyal to the party and therefore he was forced to get a prostitute for some s****l healing. The writer has created the passage in such a way that there is suspense. He has done this by making Winston write his diary in three steps and having intervals between his diary entry. ...read more.

The close description also puts us in the shoes of Winston and visualizes ourselves as Winston is writing the diary for example. The pace of the prose in some sentences fast and slow. This shows that the writer is suggesting a reflective mood and also at the same time creating some fast action. The reflective mood by using long, slow words often in conjugation with sound which are long and slow e.g. "He saw himself standing there in the dim lamplight, with the smell of bugs and cheap scent in his nostrils and in his heart a feeling of defeat and resentment which even at that moment was mixed up with the though of Katharine's white body, frozen for ever by hypnotic power of the party." For creating faster action the writer used short, simple words and brief, efficient sentences e.g. "Winston sighed inaudibly" and "The therapy had not worked". Words: 1,018 30.10.02 ...read more.