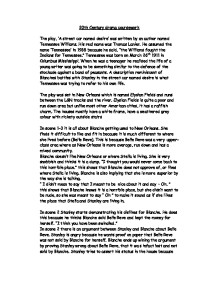 The play, 'A street car named desire' was written by an author named Tennessee Williams

20th Century drama coursework The play, 'A street car named desire' was written by an author named Tennessee Williams. His real name was Thomas Lanier. He assumed the name 'Tennessee' in 1938 because he said, "the Williams fought the Indians for Tennessee." Tennessee was born on March 26th 1911 in Columbus Mississippi. When he was a teenager he realised the life of a young writer was going to be something similar to the defence of the stockade against a band of peasants. A description reminiscent of Blanches battles with Stanley in the street car named desire is what Tennessee was trying to refer to his own life. The play was set in New Orleans which is named Elysian Fields and runs between the L&N tracks and the river. Elysian Fields is quite a poor and run down area but unlike most other American cities, it has a raffish charm. The houses mostly have a white frame, have a weathered grey colour with rickety outside stairs In scene 1-3 it is all about Blanche getting used to New Orleans. She finds it difficult to like and fit in because it is much different to where she lived before (Belle Reve). ...read more.

Stella is making out that it is not a big deal, and it is just something that always happens. Blanche also implies that Stanley is uncivilised and does not know how to behave towards her. "He acts like an animal, he has animal's habits! Eats like one, talks like one! There's even something sub human, something not quite to the stage of humanity yet! In scene 5 Blanche is obsessed with Shep Hutley because he is rich and Blanche wants his money and also she wants to prove to Stella and Stanley that she has someone in her life. "I am writing a letter to Shep. Darling Shep, I am spending the summer on the wing, making flying visits here and there. And who knows, perhaps I shake the sudden notion to swoop down on Dallas." Blanche is trying to show off to Stella and Stanley by writing the letter out aloud and by calling him darling which implies that they have some sort of relationship. When Blanche talks about Mitch, she treats him like he doesn't like her and she has to try and make an impression on him because she likes him. ...read more.

"There is no millionaire." Later on in scene 10 Stanley gets the idea to r**e Blanche because he feels that he is s******y attracted to her and he has thought about her since she has came to stay. "I've been on to you from the start." I think Stella knows about Stanley r****g Blanche because after the incident took place, Blanche began acting in a strange way. After the r**e, Blanche began turning mad. "Don't ever believe it, life has got to go on. No matter what happens, you've got to keep on going." Blanche also began to act paranoid. "Why are you looking at me like that? Is something wrong with me?" Blanches madness progress to a point where Stanley tears off the paper lantern she bought and she begins to cry out as if she is in pain. The doctor had to come to calm her down, he spoke to her very calmly in a gentle and reassuring voice. When Blanche left the house, she made a comment which was quite touching, she was trying to say that her family and friends dislike her so much and they do not show any nice feelings towards her at all, so what she doesn't have from the people she knows and loves, she will have from strangers. ?? ?? ?? ?? ...read more.