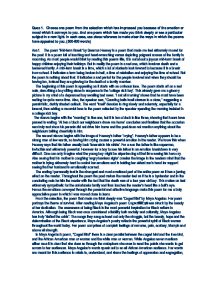 The poem Mid-Term Break versus the poem Caged Bird.

Ques 1. Choose one poem from the selection which has impressed you because of the emotion or mood which it conveys to you. And one poem which has made you think deeply or see a particular subject in a new light. In each case, use close reference to make clear the ways in which the poems have appealed to you. (500-600 words) Ans1. The poem 'Mid-term Break' by Seamus Heaney is a poem that made me feel extremely moved for the poet. It is a poem full of touching and heart-wrenching verses depicting poignant scenes of the family in mourning. As most people would think by reading this poems title, it is not about a joyous mid-term break of happy children enjoying their holidays. But in reality the poem is a sad one, which involves death and a bereaved family. A mid-term break is a time, which a lot of students look forward to because it is a break from school. ...read more.

We know this when Heaney says that his father usually took 'funerals in his stride'. For a son the father is like superman, invincible and extremely powerful. However for a boy to see his father in an emotion breakdown is very difficult. One can only imagine what the young boy might be experiencing at that time seeing his hero cry. Also seeing that his mother is coughing 'angry tearless sighs' creates the image in the readers mind that the mother is trying extremely hard to control her emotions and is holding her eldest son's hand for support seeing that her husband is emotionally scarred. The ending I personally feel is the strongest and most emotional part of the entire poem as it has a jarring effect on the reader. Throughout the poem the poet makes the reader feel as if he is a bystander and in the concluding note he hits the reader with the fact that the death was of a four year old boy. ...read more.

The anguish of imprisonment is indeed a hard thing to take. Especially when others are free to make their own choices, free to do what they wishes and to go where they will. Maya Angelou's 'Caged Bird', depicts the carefree life of a free bird and the incredible desire for freedom of the caged bird. The caged bird desperately wants to be let free but is denied, thus its only option is to sing as it is its last source of freedom. It is the only way the caged bird can express the intensity of its sorrow for its lost freedom. By singing the caged bird is keeping its spirit alive and this shows its determination and strength allowing it to survive. The birds are personified in the lives of humans in emotions, physical imprisonment, and moral attachments. This social injustice led me to think about how there are many people today who treat others unjustly merely because they believe themselves to be superior to everyone else. Therefore this poem is an excellent example to all those that are being oppressed as it shows how others have faced these unfair ways with willpower and fortitude. ...read more.