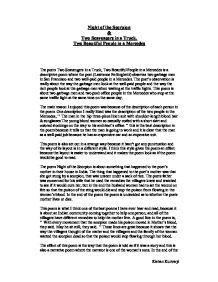 The poem Two Scavengers in a Truck, Two Beautiful People in a Mercedes is a descriptive poem by Lawrence Ferlinghetti.

I think this style gives the poem an effect because the layout is easier to understand and it makes the poem look as if the poem would be good to read. The poem Night of the Scorpion is about something that happened to the poet's mother in their house in India. The thing that happened to the poet's mother was that she got stung by a scorpion, that was unseen under a sack of rice. The poets father was concerned for his wife that he used the remedies the villagers knew and watched to see if it would cure her, but in the end the husband woman had to set the wound on fire so that the poison of the sting would die and stop the poison from flowing in the woman's blood. ...read more.

The effect of this poem is the way that the poem is told as if it was a story and this is also a narrative poem where the narrator is one of the woman's sons. In the end of the poem the poem is undecided as to whether the poets mother lives or dies. It is undecided because of the best lines in the poem which are the last two lines, '' Thank God the scorpion picked on me and spared my children. '' the poet is just saying what the last words his mother said or just saying that she would rather she die than her children. Kishan Kunvarji ...read more.