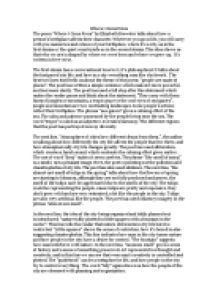 The poem Where I Come From by Elizabeth Brewster talks about how a persons birthplace affects their character.

﻿Where I Come From The poem ?Where I Come From? by Elizabeth Brewster talks about how a person?s birthplace affects their character. Wherever you go in life, you will carry with you memories and echoes of your birthplace, where it?s a city, as in the first stanza or the quiet countryside as in the second stanza. This idea shows us that who we are is shaped by where we were born and where we grew up. It?s written in free verse. The first stanza has a conversational tone to it, it?s philosophical. It talks about the fast paced city life, and how in a city everything runs like clockwork. The first two lines itself tells us about the theme of the poem; ?people are made of places?. The poet has written a simple sentence which makes it more powerful, and increases clarity. The poet has used a full stop after this statement which makes the reader pause and think about the statement. ?They carry with them hints of jungles or mountains, a tropic grace or the cool eyes of sea-gazers?, jungle and mountain are two contrasting landscapes. ...read more.

?The fountain? suggests how man interferes with nature. In the next line, ?museum smell? gives a sense of history and a sense of something preserved. Art represents free thought and creativity, and in this line we can see that even man?s creativity is controlled and plotted. The ??guidebook? can be a metaphor for life, and how people in the city try to control everything. The word ?tidy? again shows us how the people of the city are obsessed with planning and organization. The poet then talks about how the city is full of skyscraping office buildings built of steel and other sharp precise materials to give a uniform look and feel to the atmosphere, also with great complexes comes great amounts of pollution, which Elizabeth is relating to with the ?smell of work, glue factories maybe.? Smell of work also shows us how people are being made of places, as stated in the poem earlier. The images the poet is bringing out give a sense of materialism and materialistic lifestyle- ?chromium plated?. In the end of the stanza, ?smell of subways crowded at rush hours? shows the congestion that is caused by overpopulation of the city. ...read more.

The next few lines are very important. ?Spring and winter are the minds chief seasons: ice and the breaking of ice?. Spring and Winter are two opposing seasons. In this line, the poet has used them as a metaphor; Winter could represent the cold city life and Spring could represent the colorful country life. ?Ice and breaking of ice? refers to something in the mind that is broken when one makes the transition from the city to the country. The next line, ?A door in the mind blows open, and there blows a frosty wind from fields of snow?, could be telling us that the door blowing open is just another gateway opening in the mind to the memories that she holds of her childhood. ?And there blows a frost wind from fields of snow?, conveys a feel to the picture that she has been describing and it gives the reader a cold feeling. The frosty wind from the fields of snow is relevant because in Canada the winter is very frosty with a lot of snow and wind. The ?door? could also be the memory opening a blast of nostalgia t the association of winter and the ?frosty wind? suggest something less pleasant, like a realization that the past, her place, is not so good after all. ...read more.