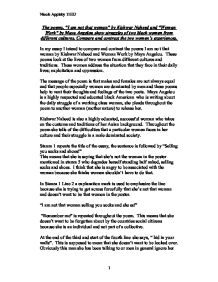 The poems, &quot;I am not that woman&quot; by Kishwar Naheed and &quot;Woman Work&quot; by Maya Angelou show struggles of two black women from different cultures. Compare and contrast the two women's experiences.

The poems, "I am not that woman" by Kishwar Naheed and "Woman Work" by Maya Angelou show struggles of two black women from different cultures. Compare and contrast the two women's experiences. In my essay I intend to compare and contrast the poems I am not that woman by Kishwar Naheed and Woman Work by Maya Angelou. These poems look at the lives of two women from different cultures and traditions. These women address the situation that they face in their daily lives; exploitation and oppression. The message of the poem is that males and females are not always equal and that people especially women are dominated by men and these poems help to vent their thoughts and feelings of the two poets. Maya Angelou is a highly respected and educated black American who is writing about the daily struggle of a working class woman, she pleads throughout the poem to another woman (mother nature) to release her. Kishwar Naheed is also a highly educated, successful woman who takes on the customs and traditions of her Asian background. Throughout the poem she tells of the difficulties that a particular women faces in her culture and their struggle in a male dominated society. Stanza 1 repeats the title of the essay, the sentence is followed by "Selling you socks and shoes!" This means that she is saying that she's not the woman in the poster mentioned in stanza 5 who degrades herself standing half naked, selling socks and shoes. I think that she is angry to be associated with the woman because she thinks women shouldn't have to do that. In Stanza 1 Line 2 a explanation mark is used to emphasize the line because she is trying to get across forcefully that she's not that woman and doesn't want to be that women in the poster. ...read more.

Married off means when a father lets another man marry his daughter for a certain amount of money. If there are numerous bidders then whoever usually pays the most will get his daughters hand in marriage. She uses the word 'burden' as if she is some mere object who can be bought and sold to the highest bidder and has no thoughts and feelings for herself. The lines "not knowing that a nation of captive minds cannot be free" are used in this stanza. 'Captive' is often referred to as being a prisoner. She tells us 'that nations minds' are held prisoner and therefore there bodies are held captive too. This means that no one is free. She uses very short lines in a short stanza because words are not needed to say how she is feeling and the mood is projected through her words. The poet is using the word 'commodity' in the poem by saying that she is the object that you bought and sold. 'Chastity, motherhood and loyalty' are all listed to tell us of all the things she can do and all the things broken and ruined by this man. Her virginity was given away, her motherhood was probably forced upon her and her loyalty forced to be used wrongly. "Now is the time for me to flower free" tells me that her prospective has changed. She is free from evil and that she now wishes to look to the future not backwards at her past. In the last three lines she reinforces the fact that she is not a slave and that she would never stoop so low as to be half-naked, selling socks and shoes. ...read more.

In conclusion I think the main points of the poems are that women in foreign countries suffer hugely and many are just looking for a way out. They can't look to the future and use Mother Nature as a friend and someone to relate to. The poets use Mother Nature to show how they struggle. They use this imagery to take them away from their individual nightmares or in the case of Kishwar Naheed she uses nature to describe how people have hurt her. "I am the one in whose lap you picked flowers and planted thorns and embers." 'I am not that women' tells us how she has been treated where as 'Woman work' tells us how she is suffering at this moment. Kishwar Naheed seems to have broken free of her personal torture where as Maya Angelou is still living through the h**l. In the poems both women seem to be discriminated against because of there s*x. This means that males have taken advantage of both women. Although both women are free physically Maya Angelou like Kishwar Naheed may have broken free mentally because she will not let them get the better of her. There is a sense of injustice in both poems because both have been treated badly and both have found themselves in situations, which have made them mentally scared. Both women have strong senses of compassion and this is showed in their appeals to nature. My views of both poems are that both have been abused mentally by the opposite s*x and their fellow peers. Both the poems are depressing and talk about there misfortunes and neither really have a strong future. I think the poems were written to appeal to our emotions and I think it has worked because I feel sorry for both women. Nicole Appleby 11HU 1 ...read more.