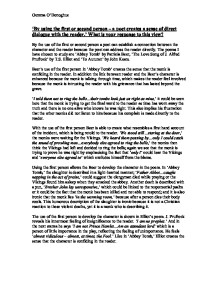 The poems I have chosen to study are 'Abbey Tomb' by Patricia Beer, 'The Love Song of J. Alfred Prufrock' by T.S. Elliot and 'To Autumn' by John Keats.

'By using the first or second person - a poet creates a sense of direct dialogue with the reader.' What is your response to this view? By the use of the first or second person a poet can establish a connection between the character and the reader because the poet can address the reader directly. The poems I have chosen to study are 'Abbey Tomb' by Patricia Beer, 'The Love Song of J. Alfred Prufrock' by T.S. Elliot and 'To Autumn' by John Keats. Beer's use of the first person in 'Abbey Tomb' creates the sense that the monk is confiding in the reader. In addition the link between reader and the Beer's character is enhanced because the monk is talking through time, which makes the reader feel involved because the monk is intrusting the reader with his grievance that has lasted beyond the grave. 'I told them not to ring the bells...their tombs look just as right as mine,' it could be seen here that the monk is trying to get the final word to the reader as time has worn away the truth and there is no one alive who knows he was right. ...read more.

The use of the first person to develop the character is shown in Elliot's poem. J. Prufrock reveals his innermost feeling of insignificance to the reader. 'I am no prophet.' And in the next stanza he says 'I am not Prince Hamlet...Am an attendant lord' which is a person of little importance in the play, reflecting the feeling of unimportance. He feels 'almost ridiculous - almost, at times, the Fool.' Like in 'Abbey Tomb,' Elliot creates the sense that the character is confiding in the reader. Elliot creates a heightened link with the reader by making the character confide his innermost worries of uncertainty. This is shown by his frequent use of direct questions. 'Do I dare disturb the universe?' 'How shall I presume?' 'How should I begin...' It can also be seen in the metaphor of the smog as a cat, 'yellow fog that rubs its back upon the window-panes...curled on about the house and feel asleep.' This metaphor stands for lack of vision literally, as he cannot see through the fog and metaphorically, as he cannot think clearly, which again reflects uncertainty. ...read more.

'Pillow by her head.' and 'To prepare a face to meet the faces that you meet,' this indicates Prufrock addressing another woman. This implication of another woman being present, distances the reader from the character of the poem. 'To Autumn' does not contain a direct dialogue with the reader, even though the poem is written in the second person because is addressed to Autumn, as proclaimed in the title of the poem. Keats makes no reference to the audience throughout the poem, but personifies Autumn 'sitting careless,' 'thy hair soft-lifted...' and 'by a cider-press, with patient look, thou watchest.' Therefore this demonstrates that a poem can be written in the second person and contain no sense of a direct dialogue with the reader. I believe that the statement is too specific; some poems in the first or second person, like 'Abbey Tomb,' are purely expressed to the reader because the use of 'I' can create the sense of a conversation. On the other hand, in 'the love song of J.Alfred Prufrock' and more directly in 'To Autumn,' another character is addressed beside the reader which weakens the sense of a direct dialogue. ?? ?? ?? ?? Gemma O'Donoghue ...read more.