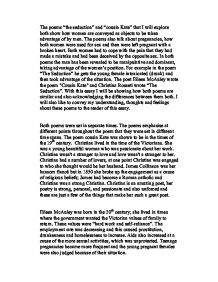 The poems "the seduction" and "cousin Kate" that I will explore both show how women are conveyed as objects to be taken advantage of by men. The poems also talk about pregnancies, how both women were used for s*x and then were left pregnant with a broken heart. Both women had to cope with the pain that they had made a mistake and had been deceived by the opposite s*x. In both poems the man has been revealed to be manipulative and dominant, taking advantage of the women's position. For example in the poem "The Seduction" he gets the young female intoxicated (drunk) and then took advantage of the situation. The poet Eileen McAuley wrote the poem "Cousin Kate" and Christina Rosseti wrote "The Seduction". With this essay I will be showing how both poems are similar and also acknowledging the differences between them both. I will also like to convey my understanding, thoughts and feelings about these poems to the reader of this essay. Both poems were set in separate times. The poems emphasise at different points throughout the poem that they were set in different time spans. The poem cousin Kate was shown to be in the times of the 19th century. Christina lived in the time of the Victorians. ...read more.

"Cousin Kate" was based in the Victorian times. She lived as a maiden girl through out her life, the poem was written through her eyes. The young girl was fine with her perfect world were no one could harm her. "To fill my heart with care?" This also shows that she hadn't loved before, she was inexperienced until this lord came and shown her a new life. In this poem were its set doesn't make the same impact as "The Seduction". It emphasises more on the time in where it was set (Victorian times) then what story the poem tells. This is a big difference with the poems. With "The Seduction" when the reader thinks of the scene in which it was set it helps you live in the young females life, it helps convey her pain and her vulnerability. "Cousin Kate" doesn't comment on the scenery in that greater detail making the reader concentrate on her repetitive life. In this case I prefer the Eileen McAuley's method, as it is more effective in a number of ways. There were also other poetic devices that played a significant role in both poems. One of these devices was Similes. The Similes were used in both poems but in a different manner, even though they were both used in diverse ways they were used in captivating way. ...read more.

This is a significant differentiation between both poems. In "Cousin Kate" she didn't have anything to corrupt her mind akin to "The Seduction". I took pleasure in reading such excellent poems as these. I believe that the poems were a morsel biased towards the males. This could be because the poets were both females and used personal experiences. I was intrigued by the way the poems were structured and how they were so similar yet extraordinarily diverse. Even though I have read both poems on a number of occasions when I read it yet again I perceive things that I didn't the previous times I read them. I don't have a preference of the two poems. They both have good and bad points to them both. "Cousin Kate" is short and tells a good story, I enjoy reading it out and it has a certain taste to it. "Cousin Kate" has bitterness, jealousy, and anger that made the poem even more appealing. Although a countless amount of people might not be able to comprehend the meanings of some of the lines. "The seduction" has a more modern language involved. It is easier for people to understand yet still powerful. It has a substantial amount of imagery that I enjoyed. It related top modern day life and what still goes on theses days. Michael Emezie 10J ...read more.