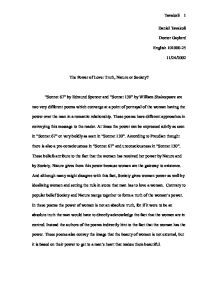 The Power of Love: Truth, Nature or Society? &quot;Sonnet 67&quot; by Edmund Spencer and &quot;Sonnet 130&quot; by William Shakespeare

Daniel Tavakoli Doctor Gaylord English 101000-25 11/24/2002 The Power of Love: Truth, Nature or Society? "Sonnet 67" by Edmund Spencer and "Sonnet 130" by William Shakespeare are two very different poems which converge at a point of portrayal of the woman having the power over the man in a romantic relationship. These poems have different approaches in conveying this message to the reader. At times the power can be expressed subtly as seen in "Sonnet 67" or very boldly as seen in "Sonnet 130". According to Freudian thought there is also a pre-consciousness in "Sonnet 67" and unconsciousness in "Sonnet 130". These beliefs attribute to the fact that the woman has received her power by Nature and by Society. Nature gives them this power because women are the gateway to existence. And although many might disagree with this fact, Society gives women power as well by idealizing women and setting the rule in stone that man has to love a woman. ...read more.

The boldness of William Shakespeare's "Sonnet 130" is best seen in the verse "And yet, by heaven, I think my love as rare / As any she belied with false compare" (13-14). The author is powerless over his emotions to his mistress. And although his "mistress' eyes are nothing like the sun" (1), he loves her. His logic appears to be completely irrational. Throughout the poem he mentions all the flaws attributed to his mistress, and how he has more enjoyment from other objects, "And in some perfumes is there more delight / than in the breath that from my mistress reeks" (7-8). His heart seems to be in a trance for her love, because despite all he flaws he still loves her. The pre-consciousness of "Sonnet 67" as Freud would interpret is most clearly seen in the naturalistic aspect of the poem. The following verse demonstrates the power women are given by nature "There she beholding me with milder look, / Sought not to fly, but fearless still did bide" (9-10). ...read more.

All of her shortcomings are false to determine the real beauty contained within her. In "Sonnet 67" there is no reference made to beauty. Based on this absence of any reference to beauty the reader can deduct that beauty has no significance to real love. In "Sonnet 67" and "Sonnet 130" the authors portray the woman as having the power in a romantic relationship. Although each accomplishes this in very different approaches, each poem gets its point across. The Freudian aspect contributes to the fact that the woman has received her power by nature and by society. Although the power of a woman is this poem is not an absolute truth, Spenser and Shakespeare both acknowledge in their own way the fact that the woman is in control. These poems also convey the image that the beauty of a woman is internal. Sources Consulted: Holt, Rinehart, and Kingston. Adventures in English Literature. New York: Harcourt Brace & Company, 1996. Donadio, James J. "THE LEVELS OF CONSCIOUSNESS." The Unofficial Online Home of Sigmund Freud. http://www.geocities.com/Athens/Crete/4158/idego.html. (24 November 2002). 1 Tavakoli ...read more.