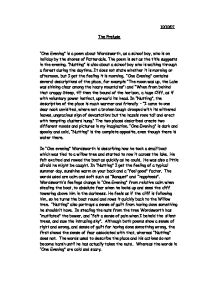 10/10/07 The Prelude "One Evening" is a poem about Wordsworth, as a school boy, who is on holiday by the shores of Patterdale. The poem is set as the title suggests in the evening. "Nutting" is also about a school boy who is walking through a forest during the daytime. It does not state whether it is morning or afternoon, but I get the feeling it is morning. "One Evening" contains several descriptions of the place, for example "The moon was up, the Lake was shining clear among the hoary mountains": and "When from behind that craggy Steep, till then the bound of the horizon, a huge Cliff, as if with voluntary power instinct, uprear'd its head. In "Nutting", the description of the place is much warmer and friendly - "I came to one dear nook unvisited, where not a broken bough drooped with its withered leaves, ungracious sign of devastation: but the hazels rose tall and e***t with tempting clusters hung." ...read more.

At the beginning of the poem he is the one in charge, rowing the boat at his pace and steering where he wants to go. Then he becomes afraid because of the enormous rocks and darkness and his imagination begins to play tricks on him. He can't get the images out of his mind, he has nightmares about it when he is asleep, and they dominate his thoughts when he is awake. The images are always in black and white, which makes it more scary because the image is bleak. In 'Nutting', Wordsworth has learned a lesson that you cannot treat the forest with disrespect, that you have to care about what you do there. However, he says that you have to be gentle. There is no long lasting fear, and of course he still has all the nuts he can eat. The oxymoron 'troubled pleasure' is illustrated in 'Nutting' through Wordsworth having enjoyed a day collecting nuts. He was dressed like a tramp, but that didn't matter. ...read more.

Many children are not allowed out on their own to go to the woods in the first place. 'One Evening' shows us that growing up can be a solitary thing, that we have to experience some things on our own in order to learn from them. Also, to learn from wrongdoing we have to know what he have done is wrong. Sometimes someone tells us we have done something wrong, but we often know immediately we are wrong without anyone having to tell us. I would have thought that anyone would know when they have done something wrong, the most relevant part to teenagers today sadly is that they often do not care whether it is wrong, and often think it would make them look important to repeat that wrong action. 'One Evening' shows the power of nature, whereas 'Nutting' balances that with the power of man over nature. Wordsworth asks nature to repair the damage he has caused 'for there is a spirit in the woods'. I prefer Nutting because it is more mischievous, and means more to me. I love climbing trees, but I don't like nuts! It speaks in plain language which is easily understood. ...read more.