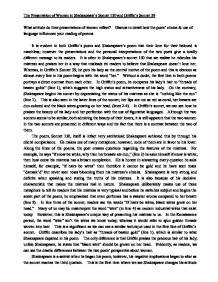 The Presentation of Women in Shakespeare's Sonnet 130 and Griffin's Sonnet 39 What attitude do their presentations of women reflect? Discuss in detail how the poets' choice & use of language influences your reading of poems. It is evident in both Griffin's poem and Shakespeare's poem that their love for their beloved is matchless; however the presentations and the personal interpretations of the two poets give a totally different message to its readers. It is often in Shakespeare's sonnet 130 that we realize he ridicules his mistress and praises her in a way that misleads its readers to believe that Shakespeare doesn't love her. Whereas, in Griffin's Sonnet 39, he puts his lady as the central motive of the poem and this is obvious as almost every line in his poem begins with the word "her." Without a doubt, the first line in both poems portrays a direct contrast from each other. In Griffin's poem, he compares his lady's hair to "threads of beaten golds" (line 1), which suggests the high status and attractiveness of his lady. On the contrary, Shakespeare begins his sonnet by depreciating the status of his mistress as she is "nothing like the sun" (line 1). ...read more.

Shakespeare is a satirist when he began his poem, however, his negative implications began to alter as the sonnet reaches the third quatrain. This is the first time where we see Shakespeare changes his attitude towards his mistress; he mentions that he loves the voice of his mistress, "I love to hear her speak.... That music hath a far more pleasing sound"(lines 9 and 10). These two lines serve a very important role in this sonnet as it represents the gap between the qualities possessed by a "perfect woman" and the reality of Shakespeare's mistress. Shakespeare then mentions that he never seen "a goddess go," meaning he have never seen a woman that is as beautiful as a goddess. He further emphasizes his points by implying that he loves his mistress because she is real and unlike goddess, she "walks and treads on the ground." (line 12) To Shakespeare, "by heaven" his "love is rare" (line 13), which implies to its readers that his mistress is by far the most beautiful woman on earth. The words, "my love," also influence us as readers to see Shakespeare and his mistress an actual couple. ...read more.

The mistress doesn't posses the qualities that Shakespeare mentioned in the first quatrain, however, she is a real woman, and real in nature. Nevertheless, woman doesn't have to be concealed within these decorations to be beautiful. The last line of Sonnet 130 identifies Shakespeare's viewpoints for women; the fact that they need not to be "belied with false compare." In comparison, the way how Griffin presents his lady may sound the world's perfect woman. Nonetheless, because of his hyperbolical statements and exaggerations, it may sound perfect to its readers, but then again, the lady becomes an idealize character and her beauty is only artificial. Through a detail study within the two poems, it is obvious that the two women presented in both poems are not similar. The poets' viewpoints differ as they have personal opinions with regards to the qualities possess by their mistress or lady, whether they're goddess-like or genuine in nature. As readers, we're greatly influenced by the words written by the poets; we are dependent on their language and words to reveal the implications and the underlying message. Kenneth Tang Form 12. 7 Word Count : 1486 1 James P. Wolf. Pimbley's Dictionary of Heraldry - G [Online] Available http://www.digiserve.com/heraldry/pimb_g.htm ?? ?? ?? ?? ...read more.