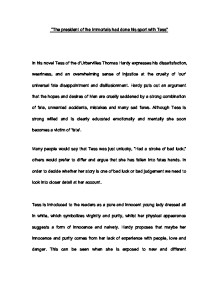 &quot;The president of the Immortals had done his sport with Tess&quot;

"The president of the Immortals had done his sport with Tess" In his novel Tess of the d'Urbervilles Thomas Hardy expresses his dissatisfaction, weariness, and an overwhelming sense of injustice at the cruelty of 'our' universal fate disappointment and disillusionment. Hardy puts out an argument that the hopes and desires of Men are cruelly saddened by a strong combination of fate, unwanted accidents, mistakes and many sad flaws. Although Tess is strong willed and is clearly educated emotionally and mentally she soon becomes a victim of 'fate'. Many people would say that Tess was just unlucky, "Had a stroke of bad luck," others would prefer to differ and argue that she has fallen into fates hands. In order to decide whether her story is one of bad luck or bad judgement we need to look into closer detail at her account. Tess is introduced to the readers as a pure and innocent young lady dressed all in white, which symbolizes virginity and purity, whilst her physical appearance suggests a form of innocence and naivety. Hardy proposes that maybe her innocence and purity comes from her lack of experience with people, love and danger. ...read more.

It's not long before the trust is shattered when he realises that he is delaying the journey home. Tess's weariness results in her falling asleep and the author talks of her being seduced by Alec. Hardy leaves the details of this seduction vague which allows the reader to fantasise what really happened. Were these events fate or caused by Tess naivety to the situation, because she is unaware of her beauty and sexuality. At this point in the novel Tess stills thinks of Alec as a hero having saved her from Car Darch. Alec's actions make Tess feel that she has to defend her right to not be physical with him rather than the fact that Alec's behaviour is inexcusable, therefore we can see that her seduction by Alec could be perceived as an error on the part of Tess. However Tess might see it as bad luck and in fact that she is to blame for Alec's actions, by not having the strength to refuse him more assertively. Soon after staying at the farm, Tess has enough courage and walks home. However from the behaviour of Alec previously, Tess falls pregnant and has Alec's baby. ...read more.

Hardy finally involves Tess to the d'Urberville tradition of murder. Again we are entwined in the theme of fate v choices, we are lead to believe that the d'Urberville heritage of murder is one of fate and yet we can clearly see Tess's action was one hundred percent her own choice. However for a woman of who feels continue abuse from her husband she may feel that the choice has been taken away from her and it is a case of survival. Hardy has a strong sense of accidental, coincidental, fate and bad luck. However it is trying to decipher which events are what. For example there are hints that Tess preordained to be murderess, and early in the story, when Prince dies, "Her face was dry and pale, as though she regarded herself in the light of a murderess." I believe that many actions that took place in her life were not always bad luck were not always fate but just the path that she led. However her constant bad luck caused her to make bad judgements which then caused us the readers to believe it is fate. To conclude Tess's innocent and beauty proved to do her no good and she was also unaware of her sexuality. Her lack of common knowledge and wanting from her also made her susceptible to other men. ...read more.