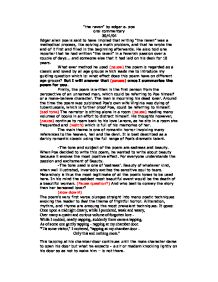 "the raven" by edgar a. poe oral commentary 30/4/04 Edgar allen poe is said to have implied that writing "the raven" was a methodical process, like solving a math problem, and that he wrote the end of it first and filled in the beginning afterwards. He also told one reporter that he had written "the raven" in a feverish passion over a couple of days... and someone else that it had laid on his desk for 10 years. What ever method he used (pause) the poem is regarded as a classic and loved by all age groups which leads me to introduce my guiding question which is: what effect does this poem have on different age groups? But I will answer that (pause) once I summarise the poem for you. Firstly, the poem is written in the first person from the perspective of an unnamed man, which could be referring to Poe himself or a make-believe character. The man is mourning his dead lover. Around the time the poem was published Poe's own wife Virginia was dying of tuberclusosis, which is further proof Poe, could be referring to himself. (sad tone) The narrator is sitting alone in a room (pause) reading many volumes of books in an effort to distract himself. His thoughts however, (pause) continue to roam back to his love Lenore, as he sits in a room she frequented and (watch) which is full of his memories of her. ...read more.

This could be symbolic of the raven as a sign of evil associated with (pause) methodical bloodshed. For example in paintings of war and carnage, there are often ravens or crows perched precariously in the trees watching and waiting for their turn for, (pause) both birds are birds of prey and feed on meat. The narrator also questions the Raven using the terms 'On the Night's Plutonium Shore' Plutonium refers to Pluto the god of h**l, also known as Hades. It has a demonic undertone. Plutonium is also a chemical element, which is produced artificially and is highly radioactive. This can be interpreted as the lover accusing the raven of being unnatural and harmful. Both Pallas and Pluto (and here we have some alliteration) are symbolic of horror scenes of bloodshed and fiery hellish times. This again aids Poe in creating a theme of darkly romantic horror. Then, methought, the air grew denser, perfumed from an unseen censer Swung by Seraphim whose foot-falls tinkled on the tufted floor. "Wretch," I cried, "thy God hath lent thee - by these angels he hath sent thee Respite - respite and nepenthe from thy memories of Lenore! Quaff, oh quaff this kind nepenthe, and forget this lost Lenore!" Quoth the Raven, "Nevermore." A censer is a ball of incense held on chains, which is used to ward away evil spirits. Here, Poe illustrates the Archangel Seraphim swinging this ball in an attempt to ward of the evil of the Raven. ...read more.

First: the young child children believe that adult are always there to protect them and so when they are shown that adults are vulnerable (pause) it can leave a horrified effect, which is just what Poe intended. Young children cannot comprehend when the abuse of the adult innocent. In fact, when Edgar Allen Poe published "the raven" in 1895 it made his so popular that children would chase him (pause) until he would turn around, (pause) raise his arms (pause) and yell "Nevermore." Something about the dark and haunting injustice of the poem caused all age groups to keep coming back for more to try and find the reasoning for evil triumphing. The image of the raven and the sad tone and the demonic undertones can all be realised consciously or sub consciously by the child (pause) adding to the gloom and sad beauty of the poem. Furthermore, (pause) children instantly respond to the repetition of 'nevermore'. They scream the word out at the end of each stanza. Poe has implicitly communicated with his audience and given them a part to play in his poem. Children express their fascination with all things scary in their reaction to "the raven". To kids, it's a fun scary rhyme. 2) Secondly: the effect on the adult The theme of love is more accessible and comprehendible to the adult than the child. The majority of adults have at one point or another in life, experienced the loss of a loved one and therefore can identify with that. The sad tone is then emphasised and adults feel the grief of the lover. ...read more.