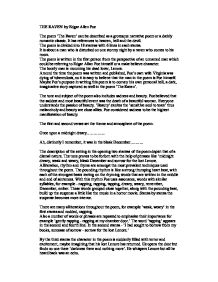 THE RAVEN by Edgar Allen Poe

THE RAVEN by Edgar Allen Poe The poem 'The Raven' can be described as a grotesque narrative poem or a darkly romantic classic. It has references to heaven, h**l and the devil. The poem is divided into 18 stanzas with 6 lines in each stanza. It is about a man who is disturbed on one stormy night by a raven who comes to his room. The poem is written in the first person from the perspective of an unnamed man which could be referring to Edgar Allan Poe himself or a make believe character. The lonely man is mourning his dead lover, Lenore. Around the time the poem was written and published, Poe's own wife Virginia was dying of tuberculosis, so it is easy to believe that the man in the poem is Poe himself. Maybe Poe's purpose in writing this poem is to convey his own personal h**l, a dark, imaginative story captured so well in the poem 'The Raven'. The tone and subject of the poem also includes sadness and beauty. Poe believed that the saddest and most beautiful event was the death of a beautiful woman. ...read more.

He opens the door but finds no one there 'darkness there and nothing more'. He whispers Lenore but all he heard back was an echo. With a burning soul he returns to the room but then hears a louder tapping on his window. The suspense builds until he flings open the shutter and in steps a 'stately Raven, the bird symbolising ill-omen who then 'perched upon a bust of Pallas'- the goddess of wisdom in Greek mythology, 'above( his) chamber door'. The man asks the raven for his name and surprisingly it answers and croaks ''Nevermore''. 9) Much I marvelled this ungainly fowl....... 10) But the raven sitting lonely...... The man surmises that the raven does not speak from wisdom, but has been taught by 'some unhappy master' and that the word 'nevermore' is the birds only vocabulary. The man welcomes the raven and is afraid that 'as (his) hopes have flown before' the raven will be gone in the morning. However, the raven when questioned, answers ''Nevermore'. The man fascinated pulls up a chair and tries to fathom out what the raven 'meant in croaking' ''Nevermore''. ...read more.

Poe uses a form of old English which seems appropriate, since the poem is about a man spending time reading books of 'forgotten lore'. The word 'Serephim' in the fourteenth stanza describes one of the six -winged angels standing in the presence of God. It is used to illustrate the swift invisible way a scent spreads. 'Nepenthe' is a potion to induce forgetfulness of pain or sorrow. 'Balm in Gilead' in the fifteenth stanza , is a soothing ointment made in Gilead, a mountainous region of Palestine east of the Jordan river. 'Aidenn' in the sixteenth stanza is an Arabic word for paradise. 'Plutonian' is a characteristic of Pluto. The god of the underworld in Roman mythology - another symbol of death to come. I like this poem. I enjoy reading it out loud because of the rhythm and beat. I can visualise the story and feel the atmosphere which builds through the poem and ends with a feeling of never ending gloomy horror and sadness as in the last three lines - And the lamplight o'er him streaming throws his shadow on the floor, And my soul from out that shadow that lies floating on the floor, Shall be lifted nevermore. ?? ?? ?? ?? ...read more.