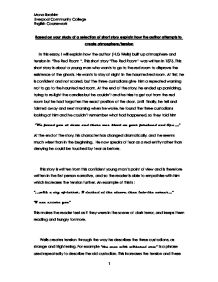 Based on your study of a selection of short story explain how the author attempts to create atmosphere/tension In this essay, I will explain how the author (H.G Wells) built up atmosphere and tension in "The Red Room ". This short story "The Red Room" was written in 1876. This short story is about a young man who wants to go to the red room to disprove the existence of the ghosts. He wants to stay at night in the haunted red room. At first, he is confident and not scared, but the three custodians give him a repeated warning not to go to the haunted red room. At the end of the story, he ended up panicking, trying to re-light the candles but he couldn't and he tries to get out from the red room but he had forgotten the exact position of the door. Until finally, he fell and fainted away and next morning when he woke, he found the three custodians looking at him and he couldn't remember what had happened, so they told him "We found you at dawn and there was blood on your forehead and lips...." At the end of the story, his character has changed dramatically, and he seems much wiser than in the beginning. He now speaks of fear as a real entity rather than denying he could be touched by fear as before. ...read more.

This is now to proof that he is scared of the whole aspect of visiting the red room and so the reader feels even more tension. This leaves the reader to ask questions and also adds to the weight of the action and tension of the story. The narrator is becoming very tense as he locks all the doors and ventures around the room making sure everything is in place and examining everything is in perfect condition. These things the narrator is doing are not the actions of a confident man. The narrator describes the room as dark so the reader can imagine that when it is dark we cannot see anything " .....its germinating darkness..." and this creates tension. As the room overflows with darkness, the narrator wants it to be filled will light instead, so he finds some candles and begins to light them. Also, he still has his revolver in his hand, although it is of no use if a ghost is actually present. Then the narrator reveals the essence of the story when he says: " it's perfect stillness, too stimulating for the imagination..." he suggests that only your own fear haunts the red room. However, there are still some sounds like the echoes and crackling noises of the fire which still annoy him: "The echoing of the stir and crackling of the fire was no sort of comfort to me" suspense is created as the reader observes the narrator is expecting something to happen. ...read more.

He hardly even remembers the custodians. Then the custodians refresh his memory. However, the custodians are desperate to know what happened in the red room. Yet, the custodians believe that the red room is haunted by ghosts and the narrator said it was haunted but it was not by ghosts. "There is neither ghost of earl nor ghost of countess in that room, there is no ghost there at all; but worse, far worse...". He makes it explicit that what is in there is fear; he uses a capital letter in 'Fear' here as it is feeling, he emphasise and refers to the word as if it was a person. However, the narrator cannot explain to the custodians exactly what has happened. Fear will always win but he cannot explain why. Also, he mentions "a power of darkness", and with this he implies that the mind plays tricks on people in the dark and that the darkness also haunts the red room. In my opinion, at the end of the story the narrator has been very successful in maintaining the tension we expect as he uses shorter sentences to keep up the suspense. In this story the writer leaves the reader with questions such as, for example, what exactly haunts the red room? ?? ?? ?? ?? Mona Ibrahim Liverpool Community College English Coursework 1 ...read more.