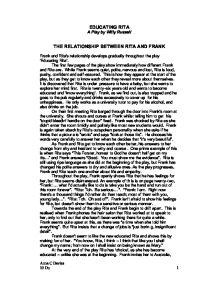 The relationship between Rita and Frank

EDUCATING RITA A Play by Willy Russell THE RELATIONSHIP BETWEEN RITA AND FRANK Frank and Rita's relationship develops gradually throughout the play 'Educating Rita'. The first few pages of the play show immediately how different Frank and Rita are. While Frank seems quiet, polite, nervous and lost, Rita is loud, pushy, confident and self-assured. This is how they appear at the start of the play, but as they get to know each other they reveal more about themselves. It is discovered that Rita is under pressure to have a baby, but she wants to explore her mind first. Rita is twenty-six years old and wants to become educated and 'know everything'. Frank, as we find out, is also trapped and he goes to the pub regularly and drinks excessively to cover up for his unhappiness. ...read more.

One prime example of this is when Rita says "This Forster, honest to God he doesn't half get on my tits..." and Frank answers "Good. You must show me the evidence". Rita is still using ripe language as she did at the beginning of the play, but Frank has changed his polite answers to dry and allusive ones. As the play progresses, Frank and Rita teach one another about life and empathy. Throughout the play, Frank openly shows Rita that he has feelings for her, but Rita seems disinterested. An example of this is on page twenty-two, "Frank: ... what I'd actually like to do is take you be the hand and run out of this room forever". "Rita: Tch. ...read more.

At the very end of the play Rita has 'choice', as she has become educated - unlike she was at the beginning. Frank invites her to Australia, but she refuses, she could go to France, her mother's, or even have a baby now she has choice. The invite to Australia shows that the friendship is now regained between the two characters. Overall, throughout the play, Frank and Rita generally grow closer and induce true friendship. They grow apart for a while when Rita is caught up with poetry and literature, and it seemed to be taking over her. She soon comes back to reality when her educated flatmate, Trish, tries to top herself. At the end of the play, Frank and Rita are as close as ever again when Rita is "gonna take ten years off him...". Anna C Davies 10 Du 1 ...read more.