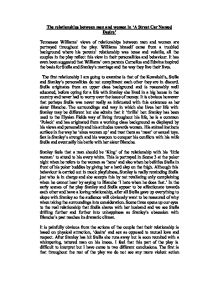 The relationships between men and women in 'A Street Car Named Desire'.

The relationships between men and women in 'A Street Car Named Desire' Tennessee Williams' views of relationships between men and women are portrayed throughout the play. Williams himself came from a troubled background where his parents' relationship was tense and volatile, all the couples in the play reflect this view in their personalities and behaviour. It has even been suggested that Williams' own parents Cornelius and Edwina inspired the basis for Stella and Stanley's marriage and the way they live their lives. The first relationship I am going to examine is that of the Kowalski's, Stella and Stanley's personalities do not compliment each other they are in discord. Stella originates from an upper class background and is reasonably well educated, before opting for a life with Stanley she lived in a big house in the country and never had to worry over the issue of money. It is obvious however that perhaps Stella was never really as infatuated with this existence as her sister Blanche. The surroundings and way in which she lives her life with Stanley may be different but she admits that it 'thrills' her. Stanley has been used to the Elysian Fields way of living throughout his life, he is a common 'Polack' and has originated from a working class background as displayed by his views and personality and his attitudes towards women. ...read more.

The first is that throughout the rest of the play we do not see any more violent action towards Stella from her husband, this only occurs when he is drunk. Stanley's behaviour and dismay when he realises his 'baby doll' has left him would lead the audience to believe that Stanley cannot comprehend what he has done and is truly genuinely sorry for hurting Stella. The action 'of pressing his face against her belly' shows that he has emotions towards his unborn child and as he descends onto his knees this is truly an act of submission as opposed to confrontation. These ideas would lead me to think that Stanley just has anger management issues and was 'at his worst' due to drink. The second conclusion would simply be that Stanley cannot stand the though of Stella leaving him as it would demean his manhood. Stanley's masculinity means a lot to him, as does his pride, if Stella were to walk out on him he would lose face amongst his piers. Therefore, he goes outside and makes a dramatic scene knowing that without a shadow of a doubt Stella's desire for him s******y will make her unable to resist coming back. ...read more.

It is fair to comment that Stanley and Blanche never once have a normal conversation. This all leads back to the ideas about relationships between men and women in general, Stanley hates the fact that Blanche is a women who is better than him, perhaps they are equally immoral but Blanche is clearly more educated and used to nicer things. She has been given all the advantages in life that were never available to Stanley and he resents her for this, more so for the fact that she throws it in his face at every opportunity by referring to him as an 'ape' and a 'Polack'. Stanley cannot stand the thought of a woman who is not going to be subservient to him and at first Blanche seems to have the will power to do this but sadly Stanley breaks her by tormenting and eventually r****g her. In conclusion, the relationships portrayed in 'A Street Car Names Desire' all focus on the ideals of male superiority and the inferiority of women. All the women are portrayed as emotionally or physically weak unable to function without the men by their side. Unfortunately in the case of Blanche and Stella it is not their weaknesses destroying their lives it's the men who play roles in them. Harriet Walker ...read more.