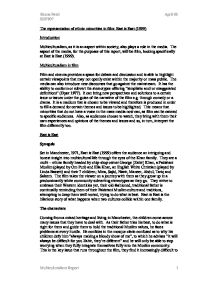 The representation of ethnic minorities in film: East is East (1999)

The representation of ethnic minorities in film: East is East (1999) Introduction Multiculturalism, as it is an aspect within society, also plays a role in the media. The aspect of the media, for the purposes of this report, will be film, looking specifically at East is East (1999). Multiculturalism in film Film and cinema provides a space for debate and discussion and is able to highlight certain viewpoints that may not openly exist within the majority or mass public. The media can also introduce new discourses that go against the mainstream. It has the ability to conform or subvert the stereotypes offering "simplistic and/ or exaggerated definitions" (Dyer 1977). It can bring new perspectives and solutions to a certain issue or issues under the guise of the narrative of the film e.g. through comedy or a drama. It is a medium that is chosen to be viewed and therefore is produced in order to fill a demand for certain themes and issues to be highlighted. This means that minorities that do not have a voice in the mass media now can, as film can be catered to specific audiences. Also, as audiences choose to watch, they bring with them their own experiences and opinions of the themes and issues and so, in turn, interpret the film differently too. East is East Synopsis Set in Manchester, 1971, East is East (1999) offers the audience an intriguing and honest insight into multicultural life through the eyes of the Khan family. They are a multi - ethnic family headed by chip-shop owner George [Zahir] Khan, a Pakistani Muslim (played by Om Puri) and Ella Khan, an English White Christian (played by Linda Bassett) and their 7 children; Mina, Sajid, Nazir, Maneer, Abdul, Tariq and Saleem. The film takes the viewer on a journey with them as they grow up in a predominantly white community subverting stereotypes as they go. ...read more.

He then goes about beating him and Ella up as he wont tell him who did it and she undermines his authority by defending Maneer. In despair, Tariq runs away to Eccles in hope that Nazir will be able to help. As Nazir comes back to Salford with him, Ella turns him away, insisting that she is fine and that if George finds out he will kill him. So now at a loose end Tariq tries to speak to his father instead. George - Don't be b****y starting coz I'm not in b****y mood. Tariq - Look dad, we're all fed up with being told what to do and where to go George - I warning you mister, I not bringing you up to give me no respect. Pakistani son always shows respect! Tariq - I'm not Pakistani, I was born here. I speak English, not Urdu. George - Son you no understand, coz you no listen to me. I trying to show you a good way to live. You no English. English people never accepting you. In Islam everyone equal see, no Black man, no White man. All Muslim. Special community. Tariq - I'm not saying it's not dad. I just think I've got a right to choose who I get married to. George - You want to be like Nazir, lose everything? You want b****y English girl. They no good. They go with other men, drink alcohol, no look after. Tariq - Well if English women are so bad, why did you marry me mam? George - b*****d! I tell you no go too far with me, you do what I tell you. Buss. You understand? You understanding?!? Tariq - I understand you, I understand you. I'll do what you want. I will get married to a Pakistani. And what ill do then, I'll get married to a f*****g English woman as well. ...read more.

Looking at the aspect of arranged marriage, my experience as a first generation British Hindu, I know that this is something that my family see as an important part of traditional Indian life. Pride and social standing within the community is highly regarded and there is much pressure to conform to this and obey your parents and elders. This allows me to relate to this aspect in the film as I have seen it somewhat in my family. Regarding other audience responses to the film, I have looked at reviews of the film on the Internet, as I have been unable to conduct any primary research due to time constraints and other responsibilities. Look at reviews as no time to do raw data Conclusion So how does the film challenge monocultural values to integrate? They are constantly reminded that they are different even though they want to integrate Look at longevity of film - can the issues still be posed to today's society Sources Dyer, R. (1977) The Matter of Images: Essays on Representation need to get rest of source info O'Donnell, D. (dir.) (1999) East is East, Filmfour, Assassin Films Directed by Damien O'Donnell; written by Ayub Khan-Din, based on his play; director of photography, Brian Tufano; edited by Michael Parker; music by Deborah Mollison; production designer, Tom Conroy; produced by Leslee Udwin; released by Miramax Films Disney. Running time: 96 minutes. This film is rated R. Perkins, J., 1999, Plot summary for East is East (1999), [online] IMDB, available from: <http://www.imdb.com/title/tt0166175/> [accessed on 16-04-06] Not used Author surname and initial Year of publication Title in italic Edition version [Online] Place of publication if known Name of publisher if known Available from: <URL> [Accessed enter date] need to cite the film 1 Buss - a term in Hindi meaning, in the context here, that's it end of conversation. 2 This is a reference to the Hindu religion where cows are seen as sacred. 3 Salwaar Kameez - a traditional trouser suit. 4 Jungli ?? ?? ?? ?? Reena Patel April 06 0307807 Multiculturalism Report 1 ...read more.