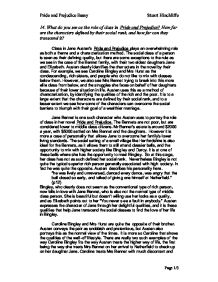 The role of class in Pride and Prejudice

14. What do you see as the role of class in Pride and Prejudice? How far are the characters defined by their social rank, and how far can they transcend it? Class in Jane Austen's Pride and Prejudice plays an overwhelming role as both a theme and a characterization method. The social class of a person is seen as their defining quality, but there are some exceptions to the rule as we see in the case of the Bennet family, with their two eldest daughters Jane and Elizabeth. Austen clearly identifies the characters in the novel by their class. For example, we see Caroline Bingley and Mrs Hurst as the condescending, rich sisters, and people who do not like to mix with classes below them. However, we also see Mrs Bennet trying to break into this more elite class from below, and the struggles she faces on behalf of her daughters because of their lower situation in life. Austen uses this as a method of characterization, by identifying the qualities of the rich and the poor. It is to a large extent that the characters are defined by their social rank, and to a lesser extent we see how some of the characters can overcome the social barriers to triumph with their goal of a wealthier marriage. ...read more.

Caroline treats Mrs Bennet with much discontent and sarcasm at this point, simply because of her class. It is with much coldness that Caroline says to Mrs Bennet, "You may depend upon it, Madam, that Miss Bennet shall receive every possible attention while she remains with us." (p42) It is at this point that Austen begins the development of Caroline as a very forthright woman, who believes strongly in the social class system, and prides herself on her situation in life. Further on in the novel comes the second example of how Austen portrays Caroline Bingley's character. The second incident that really shows the cruelness of Caroline's character is when she talks to Darcy behind Elizabeth's back about her in such a snide and vicious manner, but also full of notable sarcasm. This takes place after Elizabeth dines at Pemberley, with her aunt and uncle Mr and Mrs Gardiner. "I never in my life saw any one so much altered as she is since the winter. She is grown so brown and coarse! Louisa and I were agreeing that we should not have known her again." (p258) Through a direct manner, Austen shows through Mrs Hurst, and in particular Caroline Bingley that a character and person can largely be defined by their social rank, as these two women so frequently remind us. ...read more.

Austen's way of showing the characters in this way is quite contrary to the way she has built up the class gap between the two, but it is a gradual understanding between the two that social class does not matter that allows them to love each other. For Elizabeth Bennet, her class is initially a hindrance to her ability to fall in love with Darcy, but it is an eventual blessing as it is her class that Darcy sees through and allows him to fall in love with her. The couple are in the beginning clearly defined by their social classes, but over time defeat this class issue to find happiness with each other. In conclusion, the role of class as a theme and characterisation technique for Austen is quite important in the novel Pride and Prejudice. In the case of Caroline Bingley and Mrs Hurst, Austen shows the rich and arrogant side of society. However she also conveys two exceptions to the rule, in the case of Elizabeth and Darcy, and Jane and Bingley. These two couples both overcome the problem of different classes to find love with each other, and portray the saying that love conquers all. Indeed love does conquer the issue of social class for the two couples, and thus is breakable. However it is the manner in which Austen develops her choice of characters that allows this to happen. Word Count: 1369 ?? ?? ?? ?? Pride and Prejudice Essay Stuart Hinchliffe Page 1/3 ...read more.