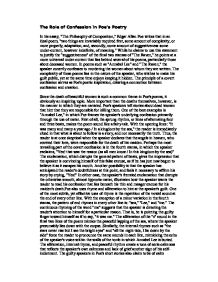 The Role of Confession in Poe's Poetry.

The Role of Confession in Poe's Poetry In his essay, "The Philosophy of Composition," Edgar Allan Poe writes that in an ideal poem, "two things are invariably required first, some amount of complexity, or more properly, adaptation; and, secondly, some amount of suggestiveness some under-current, however indefinite, of meaning." While he claims to use this statement to justify the "suggestiveness" of the final two stanzas of "The Raven," he points at a more universal under-current that lies behind several of his poems, particularly those about deceased women. In poems such as "Annabel Lee" and "The Raven," the speaker covertly confesses to murdering the women about whom they are written. The complexity of these poems lies in the nature of the speaker, who wishes to make his guilt public, yet at the same time enjoys keeping it hidden. The principle of a covert confession serves as Poe's poetic inspiration, drawing a connection between confession and creation. Since the death of beautiful women is such a common theme in Poe's poems, it obviously an inspiring topic. More important than the deaths themselves, however, is the manner in which they are narrated. Poe's speakers tell stories about dead women that hint that they are responsible for killing them. One of the best examples is "Annabel Lee," in which Poe frames the speaker's underlying confession primarily through the use of meter. ...read more.

Poe's narrators enjoy a kind of covert confessing because it is a kind of self-torment.The concept of self-torment, particularly through the act of confession, is closely tied to the idea of narcissism. The very act of tormenting oneself shows at once a degree of self-obsession. By definition, to confess is to disclose information that has previously been kept only in one's own head. Logically, then, a poem that is characterized by a speaker's confession is a poem that is about himself. The relationship of self-torture and narcissism is well-defined in "The Tell-Tale Heart," in which, at the end of the story, the narrator pulls up the floorboards in front of the police to expose the corpse of the man whom he killed. Ironically, the object that drives the speaker to murder the old man is his eye, a homonym for the word "I." The underlying suggestion is that the "eye" is at the same time the symbol of the speaker's torment and of his own self-obsession.Narcissism is indeed prevalent in many of Poe's works both prose and poetry. Several of his poems, while they are written under the guise of being about particular women (such as "For Annie" and "Annabel Lee"), are only about the speaker. For instance, in "Annabel Lee," the woman about whom the poem is written is almost entirely absent from the poem, with the exception of her name. ...read more.

Poe then offers an explanation for the absence of papers detailing the process of composition, saying that most poets would "shudder at letting the public take a peep behind the scenes, at the elaborate and vacillating crudities of thought at the true purposes seized only at the last moment at the innumerable glimpses of the idea that arrived not at the maturity of full view" What Poe does at this point is the same thing that the speakers in his other poems do he gives a covert confession. The frenzied, disorganized poetic process that Poe attributes to other poets is the very process by which he composes. The process by which Poe claims to have written "the Raven" is utterly absurd, and intentionally presented so. Just as the speaker in "Annabel Lee" gives such a ridiculous excuse for her death that it appears that he wants to be "found out," Poe makes his account of the poetic process so far-fetched that the reader becomes aware of the underlying confession. Similarly, the composing process that Poe describes is unrealistically premeditated and composed, much like the manner in which the guilty speakers narrate. The essay is, in fact, a "key" to reading his other poems. In making the essay a confession in itself, Poe draws the reader's attention to the subtle "complexity" and "suggestiveness" of the hidden confessions that characterize his other poems. At the same time, his use of confession as a basis for an essay about composition affirms the presence of a direct relationship between confession and creation. ...read more.