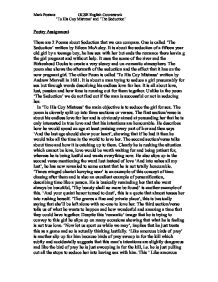 'The Seduction' written by Eileen McAuley.

Poetry Assignment There are 2 Poems about Seduction that we can compare. One is called 'The Seduction' written by Eileen McAuley. It is about the seduction of a fifteen year old girl by a teenage boy, he has s*x with her but ends the romance there leaving the girl pregnant and without help. It uses the scene of the river and the Birkenhead Docks to create a very sleazy and un-romantic atmosphere. The poem also shows the aftermath of the seduction and the effect that it has on the now pregnant girl. The other Poem is called 'To His Coy Mistress' written by Andrew Marvell in 1681. It is about a man trying to seduce a girl presumably for s*x but through words describing his endless love for her. It is all about love, l**t, passion and how time is running out for them together. Unlike in the poem 'The Seduction' we do not find out if the man is successful or not in seducing her. In 'To His Coy Mistress' the main objective is to seduce the girl for s*x. The poem is cleverly split up into three sections or verses. The first section/verse is about his endless love for her and is obviously aimed at persuading her that he is only interested in true love and that his intentions are honourable. ...read more.

He does however make a romantic statement 'Let us role all our strength and all our sweetness into one ball', basically talking about his strength and her sweetness and how they should join together and become one. An excellent metaphor can be found in the first section, 'My vegetable love should grow', this is particularly effective because vegetables grow and have deep roots so he's basically saying that his love for her will keep on growing and has truly deep meaning, this subtly persuades her. The poem is written as a monologue from the man to the girl. 'The Seduction' is split up into sixteen sections with the first eight talking about the seduction itself and the last eight sections talk about the consequences of the seduction i.e. she gets pregnant. The poem is written in a third person perspective and so is told like a story. 'With the fingers that stroked her neck and thighs and the kisses that tastes of nicotine', there is nothing really enchanting about the boy that is trying to seduce the girl but 'As he brought her more drinks, so she fell in love', so she was falling in 'love' the more drunk she became. Another phrase that demonstrates how 'un-charming', he should appear to be is 'He spat into the river, fumbled in a bag', its quite clear that this method of seduction is sleazy and un-romantic. ...read more.

A distinctive difference is in the method of seduction that the boys use, in 'To His Coy Mistress' words are the main method employed by the boy whereas in 'The Seduction' the boy uses actions to seduce the girl. Despite these differences the poems are also very similar. They are both about the seduction/attempted seduction of a girl by a boy. Both use the image of water also, in 'To His Coy Mistress' the River Ganges is used romantically and also the River Humber whereas the Mersey River is used in 'The Seduction' to create a sleazy setting as it is 'green as a septic wound'. Both poems are effective and they show two totally different methods of seduction. 'The Seduction is effective because it shows a story as well as a poem. I prefer 'To His Coy Mistress because it is an effective monologue and makes clever use of language and imagery. I like the metaphor 'My vegetable love should grow' and the simile 'Like amorous birds of prey' because I find it ironic that he makes himself look dangerous whilst trying to charm her. Although the inner message is l**t it is still more enchanting and idyllic. Also it doesn't tell us whether or not the boy is successful or not in seducing the girl, which is good because it keeps you thinking and interested in the poem. Mark Postans GCSE English Coursework 'To His Coy Mistress' and 'The Seduction' ...read more.