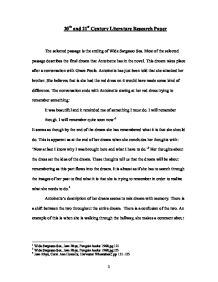 20th and 21st Century Literature Research Paper The selected passage is the ending of Wide Sargasso Sea. Most of the selected passage describes the final dream that Antoinette has in the novel. This dream takes place after a conversation with Grace Poole. Antoinette has just been told that she attacked her brother. She believes that is she had the red dress on it would have made some kind of difference. The conversation ends with Antoinette staring at her red dress trying to remember something: It was beautiful and it reminded me of something I must do. I will remember though. I will remember quite soon now'1 It seems as though by the end of the dream she has remembered what it is that she should do. This is apparent as at the end of her dream when she concludes her thoughts with: 'Now at last I know why I was brought here and what I have to do.'2 Her thoughts about the dress set the idea of the dream. These thoughts tell us that the dream will be about remembering as this part flows into the dream. It is almost as if she has to search through the images of her past to find what it is that she is trying to remember in order to realize what she needs to do.3 Antoinette's description of her dream seems to mix dream with memory. There is a shift between the two throughout the entire dream. There is a confusion of the two. An example of this is when she is walking through the hallway, she makes a comment about a burning lamp where she says 'I remember that when I came'4 this shows a shift between dream and memory. Yet another example of this shift can be seen on line sixteen where the dream has changed again: 'Suddenly I was in Aunt Cora's room...' ...read more.

A typical characteristic of a modernist novel is intertextuality.21 As Wide Sargasso Sea is based on the novel of Jane Eyre, intertexuality is a major characteristic of the novel. In terms of intertextuality the fact that Antoinette has a series of three dreams in the novel is an important factor as these dreams parallel the dreams that Jane has in Jane Eyre. The dreams in both Wide Sargasso Sea and Jane Eyre seem to give clues to the character's future. The parallel between the two characters is important as it shows in a sense that the two females can be seen as 'doubles' of each others. Antoinette and Jane both go through similar experiences and both can be referred to orphans. While Antoinette goes to a nunnery Jane has a similar experience at Lowood. They both seem to experience a kind of seclusion. It is in the final dream 'that she, like Jane, recovers her childhood, her identity.'22 It is the dream that 'becomes the instrument of her awakening...'23 The selected passage highlights a sense of lost identity. The main character Antoinette is a White Creole. Jean Rhys herself was born in the Caribbean. Her father was Welsh and her mother a White Creole. At the age of sixteen Rhys moved to England. At this point there was a 'feel of displacement that characterizes both Rhys' own like and the lives of her characters...' 24The loss of identity that is highlighted in the selected passage may be seen as a reflection of the author's own life: 'On the whole her auto biographical background enriches the entire fabric of Wide Sargasso Sea...'25 Rhys lived part of her life traveling in Europe. It was here that 'she became familiar with the innovative works of modern artists and writers'26 Which is most likely what influenced her as a modernist writer. However despite the modernism in Wide Sargasso Sea: "We are also aware that the sensibility is clearly of contemporary understanding'27Before Wide Sargasso Sea Rhys wrote four novels. ...read more.

It is in this dream where Antoinette's nostalgia becomes very apparent. According to Su the feeling of regaining a sense of place for Antoinette comes from her being able to 'locate her memories in a place...' 48 Su feels that in fact Antoinette's leap of suicide represents a form of 'resistance against the history of colonial violence'49 and it is not just an act of a madwoman, which is the way it is shown in the intertextually linked novel of Jane Eyre. Su's journal shows us that nostalgia in the novel of Wide Sargasso Sea can be disturbing as we are left wondering with what could have been. Su's journal provides us with a different way of looking at the dream. We are able to look past seeing the dream as just something Antoinette decides she has to do. It enables us to look further into Antoinette's position and situation. Antoinette's suicide gives her a release and primarily gives us a slight feeling of joy for her because we feel a kind of relief for her. However by looking at the passage through Su's perspective we seem to feel a different feeling which is an empty disturbing feeling. This is because even though Antoinette is getting released from a false identity mixed with a life of confinement and is reaching her goal; this goal is in fact inaccessible to her. However by reading Su's work we are able to see not only the disturbing side of Antoinette's suicide we are able to see the better side. We are able to see it as a symbol for resisting the violence in colonial history. This source is useful because through reading it we can read the selected passage of the ending of the novel without seeing Antoinette as just a mad woman who kills herself. We are able to realize what the unwritten depths of her death are, what they mean and we are able to place it in context with the rest of the novel. ...read more.