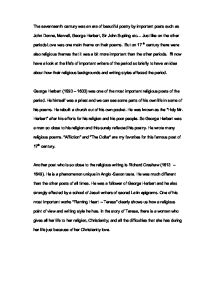 The seventeenth century was an era of beautiful poetry by important poets such as John Donne, Marvell, George Herbert, Sir John Supling etc... Just like on the other periods Love was one main theme on their poems

The seventeenth century was an era of beautiful poetry by important poets such as John Donne, Marvell, George Herbert, Sir John Supling etc... Just like on the other periods Love was one main theme on their poems. But on 17th century there were also religious themes that it was a bit more important than the other periods. I'll now have a look at the life's of important writers of the period so briefly to have an idea about how their religious backgrounds and writing styles affected the period. George Herbert (1593 - 1633) was one of the most important religious poets of the period. He himself was a priest and we can see some parts of his own life in some of his poems. He rebuilt a church out of his own pocket. He was known as the "Holy Mr. Herbert" after his efforts for his religion and his poor people. So George Herbert was a man so close to his religion and this surely reflected his poetry. He wrote many religious poems. "Affliction" and "The Collar" are my favorites for this famous poet of 17th century. Another poet who is so close to the religious writing is Richard Crashaw (1613 - 1649). He is a phenomenon unique in Anglo-Saxon taste. He was much different than the other poets of all times. He was a follower of George Herbert and he also strongly effected by a school of Jesuit writers of sacred Latin epigrams. ...read more.

Then after examining it closely you realize that the allusions used in the poem, are in fact, what makes this poem so interesting. The speaker begins the poem by explaining to his mistress that if they had the time and place to discuss there feelings, then it would be no crime to complain and the modesty and reluctance among them would also be ok. However because the situation does not permit them to have such a discussion, he attempts to explain how he feels, in a poem. He begins his explanation by saying "I would love you ten years before the flood" which to me means that he would love her from the beginning of time. He then continues by saying, "and you should if you please refuse, till the conversion of the Jews". If the reader has any knowledge of the strength of the belief of Jewish people in their faith, then the reader would get the idea that the speaker meant to say that he will lover till the end of time, even if she was to refuse his love. Next, the speaker compares his growing love for her to the expansion of great empires. In lines 11 and 12 the speaker says, "and my vegetables love should grow, vaster than empires and more slow." Once again the speaker is alluding to something not directly related to love. This comparison has great meaning when you consider the size and rate of growth of empires and also the fact that love is something that builds and grows with time, as do great empires. ...read more.

This theme is nicely expressed by creating a dialogue between a body and the soul by Marvell. "To the Virgins" is representative of many of Herrick's best poetry. It uses imagery, especially with flowers. It is believed that "To the Virgins" is written in ballad form and it's told that most of Herrick's poetry is in musical form. "To the Virgins" is a small poem. This is a typical characteristic o Herrick's style. Most of his poems are small in size but strong enough to show the feelings with using powerful words and imageries. In the poem Herrick says the best age is youth when women are young. Midlife or middle age is worse, and old age is the worst because death will overtake them. He believes that once young women become old nobody will care about them, and they will have to die alone. Therefore, women must make the most of their day by engaging in matrimony. Herrick talks about how the Sun once it slowly goes up and reaches the top it rapidly starts to decline, that shows that human life is the same way. When we get slowly older but before knowing they are quickly old, so they should says Herrick make best use of the time and get married. He also uses a nice imagery of a flower. He expresses a woman like a flower which born and gives good colors etc. after a while. Then some time later it starts to wither. Then it dies. A woman also grows up, matures and becomes beautiful. Then, she slowly grows old and looses her beauty and dies ...read more.