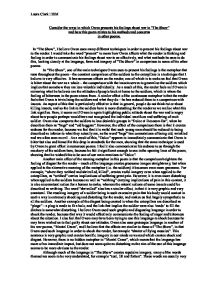 Consider the ways in which Owen presents his feelings about war in "The Show" and how this poem relates to his methods and concerns in other poems. In "The Show", I believe Owen uses many different techniques in order to present his feelings about war to the reader. I would take the word "present" to mean how Owen affects what the reader is thinking and feeling in order to communicate his feelings about war to us effectively, and what methods he uses to do this, looking closely at the language, form and imagery of "The Show" in comparison to some of his other poems. In "The Show", one of the main techniques Owen uses to present his feelings is the metaphor that runs throughout the poem - the constant comparison of the soldiers to the caterpillars is a technique that I believe is very effective. It has numerous effects on the reader, one of which is to make us feel that Owen is bitter about the war as a whole - the comparison with the insects serves to generalise the soldiers which implies that somehow they are less valuable individually. As a result of this, the reader feels as if Owen is mirroring what he believes are the attitudes of people back at home to the soldiers, which is where the feeling of bitterness in the poem stems from. A similar effect of the continuous metaphor is that the reader feels that Owen is trivialising the soldiers and what they do - he has reduced them to a comparison with insects. ...read more.

"Mental Cases" uses much more extreme words to create impact - for example "shatter", "gouged" and "carnage incomparable". The reader would probably feel that these words and phrases are much more suitable to the dramatic subject matter of the poem and so although we would expect "Mental Cases" to affect us more, I believe that the subtlety of "The Show" is actually more effective in communicating what Owen feels. This is because "Mental Cases" appears to be a lot more straightforward, and although it is disgusting, it is not disturbing. Although both communicate the bitterness and anger well, "The Show" is more understated which I believe is a key difference and a result of the differing techniques used by Owen - as it is more thought provoking for the reader. However, "Mental Cases" is very similar in it's frequent use of onomatopoeia, which gives the same effect here as it does in "The Show". The heavy use of words such as "gouged" and "shatter" again help to create the horrific imagery in the reader's mind, and emphasis the carnage that the soldiers would have seen. The use of onomatopoeia is a very effective technique that Owen uses that helps to shock the reader, perhaps adding to our feeling of guilt and sympathy for the soldiers and adding to the feeling of anger that Owen demonstrates to the reader. Linking to an earlier point about an effect of the comparison, another method that implies Owen feels bitter about attitudes around that time is the style of language overall that he uses in this poem. ...read more.

This is shown by the use of the word "you" frequently throughout the final stanza, making it much more personal and much more directly angry. Like "The Show", the language also changes in terms of the imagery, with the final stanza of "Dulce" containing much more graphic imagery, such as "white eyes writhing in his face". It has the same effect, in that the reader feels shock at the change in style and disgust at the more horrific language as it becomes easier to visualise. However, the final part of "Dulce" also emphasises the overall tone of the poem, in that because of the way it feels like a rant, Owen's bitterness and resentment strongly shows. This is more of a contrast to "The Show" because there, the tone of the poem seems continuous all the way through, in that much of it comes across without an obvious tone and this does not change in it's final stanza. Overall, I believe that Owen uses a variety of techniques to effectively show his opinions and feelings on war, from anger to resentment and from bitterness to sadness. I feel that many of his poems communicate his feelings to the reader effectively and leave us with many different things to think about. However, I feel that the general feeling Owen had about war was one of intense dislike due to the combination of the main emotions he shows and his obvious distress at the injuries and damage the soldier suffered, and the methods he used successfully portrayed that to the reader. ?? ?? ?? ?? Laura Clark 12EM ...read more.