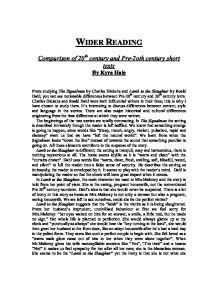 WIDER READING Comparison of 20th century and Pre-2oth century short texts By Kyra Hale From studying The Signalman by Charles Dickens and Lamb to the Slaughter by Roald Dahl, you can see noticeable differences between Pre-20th century and 20th century texts. Charles Dickens and Roald Dahl were both influential writers in their time; this is why I have chosen to study them. It's interesting to discuss differences between content, style and language in the stories. There are also major historical and cultural differences originating from the time difference at which they were written. The beginnings of the two stories are totally contrasting. In The Signalman the setting is described intricately though the reader is left baffled. We know that something strange is going to happen, since words like "Steep, trench, angry, violent, pulsation, rapid and clammy" warn us that we have "left the natural world". We learn from when the Signalman looks "down the line" instead of towards the sound that something peculiar is going on. All these elements contribute to the suspense of the story. Lamb to the Slaughter is different; the setting is tranquil, cosy and harmonious, there is nothing mysterious at all. The home seems idyllic as it is "warm and clean" with the "curtains drawn". ...read more.

The narrator felt "daunted" and "stepped back" when the Signalman spoke, as if he is afraid. Suspense is used to keep the reader interested and The Signalman certainly achieves this aim. There is a climactic build up towards the end when the Signalman tells his traumatic story of the deaths he's viewed, as "if it came, on those two occasions, only to prepare me that its warnings were true, and so to prepare me for the third." Dickens draws us into the story by making us feel the Signalman's torment; he knows there is going to be an accident but he can't warn anyone because he doesn't know what to warn them of, and he feels people would "displace" him from his job. As we see everything through the Signalman's eyes, we see his worry and feel his "feverish distress" about the future, which lures the reader to read more. Towards the end, we know that something "treacherous" is going to happen. Dickens causes immense suspense by the intricate descriptions of the railway and "the nameless horror" that we know is going to happen but he plays with time to make us wait to reveal the ending. In many of Dickens stories, he likes to play around with people's minds, a prime example is Great Expectations which starts with the uneasy setting of the churchyard and the thought that the convict could seriously harm Pip. ...read more.

As well as this Dickens uses the supernatural theme to be engaging. In Lamb to the Slaughter Dahl also makes a point about modern technology. The detectives were gullible, they think if they "get the weapon, and you've got the man". Here Dahl is being humorous to enlighten a serious atmosphere. They are looking for stereotypes. The detectives are just following routine, looking for the stereotypical weapon like a "big spanner" and the stereotypical coldhearted male killer. In the 19th century the reader liked to see people locked up, so that you are working alongside the detectives, but here we are working with the murderer, scheming with her. The detectives have all the modern technology, fingerprints experts, photographers, detectives, but they still couldn't find the murder weapon as "the murder weapon is probably right underneath our noses". In both stories there are violent deaths. Both also have a central character who is "out of their mind". The Signalman is psychologically disturbed by his strange experiences, whereas Mrs.Maloney acts totally out of character because her life has been turned upside down. Despite the time difference, the stories have certain elements in common. Certainly, both are intriguing and capture the reader's interest. However, Dahl shows that to write a good story, you don't have to follow the written law for the mystery genre as he disobeys all conventional methods. ...read more.