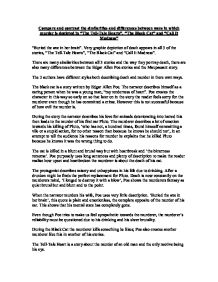 The similarities and differences between ways in which murder is depicted in &quot;The Tell-Tale Hearts&quot;, &quot;The Black Cat&quot; and &quot;Call It Madness&quot; &quot;Buried the axe in her brain&quot;. Very graphic depiction of death appears in all 3 of the stories

Compare and contrast the similarities and differences between ways in which murder is depicted in "The Tell-Tale Hearts", "The Black Cat" and "Call It Madness" "Buried the axe in her brain". Very graphic depiction of death appears in all 3 of the stories, "The Tell-Tale Hearts", "The Black Cat" and "Call It Madness". There are many similarities between all 3 stories and the way they portray death, there are also many differences between the Edgar Allen Poe stories and the Maupassant story. The 2 authors have different styles both describing death and murder in there own ways. The black cat is a story written by Edgar Allen Poe. The narrator describes himself as a caring person when he was a young man, "my tenderness of heart". Poe creates the character in this way so early on so that later on in the story the reader feels sorry for the murderer even though he has committed a crime. However this is not successful because of how evil the murder is. During the story the narrator describes his love for animals deteriorating into hatred this then leads to the murder of his first car Pluto. ...read more.

This shows that his mental state has completely gone. Even though Poe tries to make us feel sympathetic towards the murderer, the murderer's reliability must be questioned due to his drinking and his sheer brutality. During the Black Cat the murderer kills something he likes; Poe also creates another murderer like this in another of his stories. The Tell-Tale Heart is a story about the murder of an old man and the only motive being his eye. The language used in the Tell-Tale Heart is less descriptive than that in The Black Cat. Like the narrator in The Black Cat the murder is described very bluntly, quickly and without any real description. He explains how 'In an instant I dragged him to the floor, and pulled the heavy bed over him'. This small quotation is the whole description to a murder that thee writer has built up to from the start of the story. The description shocks the reader because of the bluntness of the language. The short, brief and blunt depiction of death also appears in The Black Cat. ...read more.

He tells of his 'urge to strangle her, to pin her to the bed'. The narrators fantasy is very detailed and violent giving us an inside into his confused state of mind and his relationship with his wife. As in The Black Cat the narrator tries to make the reader sympathise with him. At the start of Call It Madness the narrator complains about how he has 'suffered, suffered unendingly, intensely, agonizingly'. He uses a whining tone which makes the reader feel sorry for him and have pity on him. The murder in Call It Madness contrasts with the rest of the story. Instead of being very detailed it is blunt and abrupt. Rather than describing the murder in detail he simply 'let her have my other bullet in the stomach'. This shocking technique is used in all 3 of the stories because it shock the reader after giving such detailed description before hand. As we have seen all 3 of these stories depict murder in a very blunt way. The authors manipulate the readers into feeling sorry for the murderers before they commit there violent acts. Once the narrator has murdered the readers begins to feel strong hatred towards them because of how they tricked the readers into believing their innocence. ...read more.