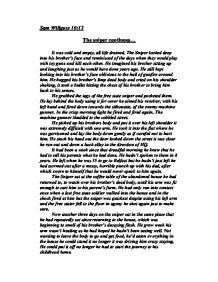 Sam Willgoss 10:12 The sniper continues... It was cold and empty, all life drained. The Sniper looked deep into his brother's face and reminisced of the days when they would play with toy guns and kill each other. He imagined his brother sitting up and laughing just as he would have done years ago. He still kept looking into his brother's face oblivious to the hail of gunfire around him. He hugged his brother's limp dead body and cried on his shoulder shaking, it took a bullet hitting the chest of his brother to bring him back to his senses. He grabbed the tags of the free state sniper and pocketed them. He lay behind the body using it for cover he aimed his revolver, with his left hand and fired down towards the silhouette, of the enemy machine gunner. In the crisp morning light he fired and fired again. The machine gunner thudded to the cobbled street. He picked up his brothers body and put it over his left shoulder it was extremely difficult with one arm. He took it into the flat where he was garrisoned and lay the body down gently as if careful not to hurt him. He stuck his head out the door looked down the street it was clear he ran out and down a back alley in the direction of HQ. It had been a week since that dreadful morning he knew that he had to tell his parents what he had done. He hadn't spoken to them in 8 years. ...read more.

He aimed his revolver down the street with both hands on the gun he lined up the chest of the soldier closest to him and fired it was a great shot and the free stater fell to the floor the other two dropped almost as quick for cover looking around trying to spot the sniper but he could not be seen he quickly lined up the next soldier, he could not let them call for support or find themselves cover. He fired it hit him in the head he dropped his gun and lay lifeless. The other soldier had seen the flash of the revolver and knew were the sniper was he began to return fire with his rifle. The sniper couldn't afford to lie there until he got hit, he roughly took aim and fired he hit the soldier in the arm but didn't kill him. He was still under fire; he fired again and scored another head shot. He picked himself up and sprinted down to the checkpoint to see whether it was clear. He stood in between the three dead soldiers scanning around, it was clear. He ran back got the cart and came back as quickly as possible he knew that he need to disappear as soon as possible because they probably would have called for back up as soon as the first man went down. He picked up all the rifles and the ammunition loaded them on the cart and ran as fast as he could down the road out of the h**l that was Dublin. ...read more.

He looked around the table at what must be his cousins kids looking scared and at his aunt and uncle who were looking disgusted. The sniper looked back at his father who was approaching him "Is that chew Paddy?" said Murphy "I thought I told ya if ya ever set foot on this farm I'd kill ya." Murphy pulled back his beefy right fist and smacked Paddy flush on the cheek, it started bleeding, there was a gasp of shock from the table, but Paddy stood there, motionless with no sign of shock, it was clear that he was not there to fight "What are you doing here son?" asked Sinead putting herself between here husband and her son. Paddy replied "I needed to tell you myself you deserve that much," he pulled the tags out of his pocket and held them out for his mum, she took them and almost immediately broke down and cried, she turned and hugged her husband, who looked at the tags and walked forwards, tears swelling up in his eyes, he hit Paddy again who remained motionless for few seconds but then he let it all out, what he had been bottling up for twelve days he came forward, looked at his dad and they both broke down and hugged each other, Paddy looked back at the cart which his brother was laying dead in and thought to himself, how pointless and how much he hated war and he swore to himself that he would never fight in another war ever again. The End ...read more.