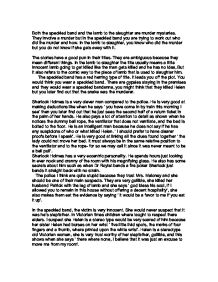 The speckled band and The lamb to the slaughter

Both the speckled band and the lamb to the slaughter are murder mysteries. They involve a murder but in the speckled band you are trying to work out who did the murder and how. In the lamb to slaughter, you know who did the murder but you do not know if she gets away with it. The stories have a good pun in their titles. They are ambiguous because they mean different things. In the lamb to slaughter the title usually means a little innocent lamb going to get killed like the man gets killed and he has no idea, But it also refers to the comic way to the piece of lamb that is used to slaughter him. The speckled band has a red herring type of title. It leads you off the plot. You would think you wear a speckled band. There are gypsies staying in the premises and they would wear a speckled bandanna, you might think that they killed Helen but you later find out that the snake was the murderer. Sherlock Holmes is a very clever man compared to the police. He is very good at making deductions like when he says ' you have come in by train this morning I see' then you later find out that he just sees the second half of a return ticket in the palm of her hands. ...read more.

Helen is a stereotype old Victorian woman, she is very trust worthy of her stepfather, gullible, and this shows when she says ' there where none, I believe that it was just an excuse to move me from my room'. Helen was not a direct victim but she would have been if Sherlock had not swapped rooms with her. The victim in the lamb to the slaughter was not completely innocent because Patrick Maloney told his wife something ' please sit down I have some news' we could assume that he is having an affair or something. We also have less sympathy for Mr. Maloney because he is a not very well developed character. The villain is the central character in the lamb to slaughter. She is a strange character because she is very quiet, very happy in the marriage and suspects nothing or seems to suspect nothing. Mrs. Maloney is capable of blocking out unpleasant thoughts as shown when she thinks after she has killed him ' if she entered the house, she happened to find anything strange or unusual or tragic or horrible than naturally it would be a shock and she'd become frantic with grief and horror'. You would not expect her to murder Mr. ...read more.

It is good for the story because the narrator can run over all the clues to help the reader understand the story. In the speckled band most of the story is dialogue. There is speech in it though and it is usually a long explanation. In the lamb to slaughter the language is very simple 'hullo darling' I think this was done on purpose. There is a lot of irony in the dialogue, which builds up and becomes obvious like when the police say 'the murder weapon is probably right under our noses ' and they are eating it. This is a good example of black humor. The speckled band is very complex. It includes a lot of description, which gives it a realistic feel. It also gives the reader a good idea of where the story is set and what the characters personalities are like, 'her skin- for this was her sixth month child- had acquired a wonderful translucent quality'. I preferred the speckled band because it is good fun working out who did the murder. It is a lot more interesting working out the clues, who and how the murder was done. It was also very good that the snake did the murder. I think the Conan Doyle story is a simple and affective story. The speckled band story worked the best for me because of its interesting plot. ...read more.