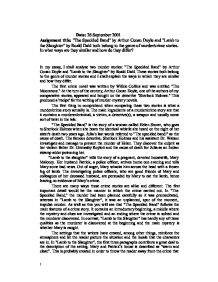 &quot;The Speckled Band&quot; by Arthur Conan Doyle and &quot;Lamb to the Slaughter&quot; by Roald Dahl both belong to the genre of murder/crime stories. In what ways are they similar and how do they differ?

It was left to the reader's imagination, although, it indicated that Patrick was going to leave Mary. In these stories, there were two leading detectives. They were Jack Noonan in "Lamb to the Slaughter" and Sherlock Holmes in "The Speckled Band." However, Sherlock has an assistant, Dr. Watson. In "The Speckled Band," Sherlock and Watson are main characters whereas Jack Noonan from "Lamb to the slaughter" is not. A well as this, another difference is the fact that Sherlock and Watson are private detectives compared to Noonan who is not. Sherlock Holmes is renowned for his "intuitions" and "logic." A fine example of this is when he notices that Helen Stoner travelled by train, then dogcart, having observed the return ticket in her hand. This makes the reader admire Sherlock and have faith in him to solve a difficult case. In contrast, Jack Noonan from "Lamb to the Slaughter" is not as open-minded as Sherlock Holmes. He says, "...you've got the man," which shows that he didn't think of suspecting Mary, as she was a woman. The reader would have probably have thought that if Sherlock was investigating this particular crime, he probably would have suspected Mary sooner or later. Jack, however, is very kind and caring towards Mary as he regularly talks to her to make sure she is ok. ...read more.

However, the reader's interpretations of Mary change dramatically as the story approaches the end. This is because Mary is not as nice and sweet as she was at the beginning. This shows that Mary has the signs of a split personality. In comparison, when the writer for "The Speckled Band" uses his character, Sherlock Holmes, to give his views, Holmes appears quite calm and even callous as he says, "I cannot say that it is likely to weigh very heavily upon my conscience." The issue of orals and ethics is bought up at the end of both the stories and, in some ways, debates if murder is acceptable in certain situations. The answer to this from Dahl's point of view is that Mary was essentially a sweet and nice woman who was provoked into committing a crime that she didn't mean to commit and so should not be punished. Conan Doyle thinks that Roylott was a nasty and evil man who got what was coming to him and that justice had been served in the form of his death. This means that both the stories had effective endings. In conclusion, this essay shows that these two stories had many similarities and differences which all contributed to the way in which the stories are interpreted by different readers and make them what they are. ?? ?? ?? ?? 1 ...read more.