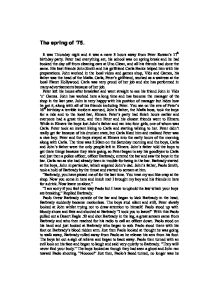 The spring of '75. It was Thursday night and it was a mere 8 hours away from Peter Rowan's 17th birthday party. Peter had everything set, his school was on spring break and he had booked the day off from cleaning cars at Uno Clean, and all his friends had done the same. His best friends John Smith and his girlfriend Carla Banks helped him with his preparations. John worked in the local video and games shop, Vids and Games, his father was the head of the Mafia. Carla, Peter's girlfriend, worked as a waitress at the local Planet Hollywood. Carla was very proud of her job and she has performed in many advertisements because of her job. Peter left his house after breakfast and went straight to see his friend John in Vids 'n' Games. John has worked here a long time and has become the manager of the shop in the last year. John is very happy with his position of manager but hides how he got it, along with all of his friends including Peter. You see on the eve of Peter's 16th birthday a terrible incident accrued, John's father, the Mafia boss, took the boys for a ride and to the local bar, Elmers. Peter's party had finish hours earlier and everyone had a great time, and then Peter and his closest friends went to Elmers. ...read more.

You don't suppose its anything to do with last year do you?" "No! It couldn't be. Nobody knows" replies Peter. The two stop talking about the subject and Peter asks John if he has everything ready for the party. John pulls out a list of all the things he was told to get, all of which have ticks next to them. "Very interesting Mr. Bond" says Peter. The two start laughing. Peter tells John he will see him at his house at five. An hour before the party starts. On the way home Peter ran into Tom Pob or 'Pobby' who was a security guard at Waterton Place the town's shopping centre. Tom was also at the bar with the boys and suffered a lot with psychological illness after the incident but was now thankfully ok. Tom had told Peter earlier in the week that he wouldn't be able to finish early so he would be round at his house for seven. Tom called Peter and gave him a card and a present. "Here you go buddy, hope you like em. I have got half an hour off because Jimmy is coming in at 6:30 so I will be there as soon as I can get after the ok? Anyway bud, must dash, I am supposed to be working. Ha. Peace." "Yeah see ya later mate." ...read more.

Peter rushed down into the basement a to see John lay on the floor with blood all over his body coming from his neck. Peter rushed to his aid but John was already dead. Peter stood up and ran as fast as he could and went to Elmers. When he got there it was empty, no bar staff, no people in their drinking or anything. Peter began to cry and he ran out of the door. When he got there he began to look around the town and saw that he was stood more or less in the place of Barbrady's death. Just then Carla runs up from Peter's house crying saying. "I have just seen John dead in your basement." "I know," said Peter "Pobby is dead aswell." Carla began to laugh and said, "I know, it was me. I know what John did to Barbrady, I was stood right over there in this bushes hiding watching the whole thing. I didn't say anything because I thought you were going to tell the police. Then I over heard you and John talking about it saying you did the right thing not telling the police." With that, Carla pulled out a knife and slowly pushed it into Peter's chest. As Peter fell to the ground. Carla said, "I bet you don't think it was the right thing to do now do you?" The End. Written by Thomas Boulton. ...read more.