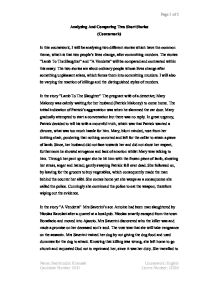 The stories &quot;Lamb To The Slaughter&quot; and &quot;A Vendetta&quot; will be compared and contrasted within this essay. The two stories are about ordinary people whose lives change after something unpleasant arises

Analysing And Comparing Two Short Stories (Coursework) In this coursework, I will be analysing two different stories which have the common theme, which is that two people's lives change, after committing murders. The stories "Lamb To The Slaughter" and "A Vendetta" will be compared and contrasted within this essay. The two stories are about ordinary people whose lives change after something unpleasant arises, which forces them into committing murders. I will also be varying the reaction of killings and the distinguished styles of murders. In the story "Lamb To The Slaughter" The pregnant wife of a detective; Mary Maloney was calmly waiting for her husband (Patrick Maloney) to come home. The initial indication of Patrick's aggravation was when he slammed the car door. Mary gradually attempted to start a conversation but there was no reply. In great urgency, Patrick decided to tell his wife a mournful truth, which was that Patrick wanted a divorce, what was too much hassle for him. Mary, blunt minded, rose from her knitting chair, pondering that nothing occurred and left for the cellar to attain a piece of lamb. Since, her husband did not face towards her and did not show her respect, furthermore he showed arrogance and lack of emotion whilst Mary was talking to him. ...read more.

Mary is middle class person, this can be seen by the type of home she lives in, plus she has all the necessary things in her cottage. She relies on a bread winner which is her husband. She is a very sensitive and loving wife of Patrick; she does this through knowing as well as doing her job given by her husband, performing certain things which every man would love her wife to do. Intelligence and cleverness helped her to get away with the murder she had committed. After she murders her husband; she promptly goes to the grocers, so she creates an alibi, this corroborates that she is sharp and cunning. Patrick is normal husband, he needs everything right and on time. His caring wife is pregnant. He is a detective and has his daily routine. Through being a detective, he is able and wise with his moves. Patrick is selfish man, he's also arrogant and rude, and along with all that he has lack of emotions. Always frustrated and has anger on the top of his mind. It is still a mystery on what sort of husband he is. The way he does and says things is very subversive, in addition he is disloyal. ...read more.

Mrs Saverini was forced to kill Ravolati because of anger, frustration and anguish. The two murderers were both incapable of doing murders since one was old and the other was pregnant. We feel sorry for both murderers since: 1. Mary is pregnant and is proud of being Patrick's wife and is heartbroken 2. Mrs Saverini's husband is already dead in addition her only son dies and now she is alone. Mrs Saverini is an old widow, who has lost the only one close to her, therefore has little to live for, however, Mary Maloney is still young and pregnant, moreover, she has a long life to live and a child to look forward to. This is the focal difference between the two killers; furthermore this affects the style and reaction to the murders each one has committed. Mrs Saverini's premeditated murder had to be precise, to fulfil her aim, yet Mary in a moment of insanity hit a piece of lamb on the back of Patrick's head without a second thought. She then starts worrying about getting caught since she has a long life ahead and doesn't want it to be spent in jail, while Mrs Saverini is relaxed and calm, therefore this suggests the difference between the two characters. ?? ?? ?? ?? Page 1 of 5 Name: Bashiruddin Khansab Coursework: English Candidate Number: 0131 Centre Number: 13230 ...read more.