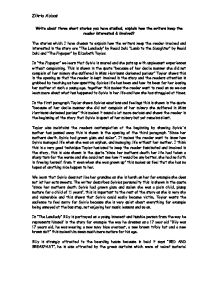 Billy is strongly attracted to the boarding house because in bold it says "BED AND BREAKFAST", he is also attracted by the green curtains which were of velvet material which seemed old fashioned and when he looked into the window the fire attracted him because it was very cold outside. There are also many strange things which the Landlady says for example as soon as Billy enters the house, she says "I saw the notice in the window" Says Billy "Yes I know" Says Landlady "I was wandering about a room" Says Billy "Its all ready for you my dear" Says Landlady This is very strange because it shows that she was already expecting Billy which is very peculiar, this creates a great sense of suspense and it seems very sinister and menacing. Another eccentric thing is that the hotel overall is very discounted only �5 including breakfast and accommodation and she seems to be really nice and looks nice and so Billy is not at all apprehensive. However the reader already feels that something is not quiet right because of what the Landlady says, The mystery created in "The Landlady" and "The Flypaper" is very similar. In the end we learn that the Landlady is a murderer because she has a list of all who have visited the hotel and both the people who have visited have never been seen again and are missing. ...read more.

She just gets the lamb and hits it around his head. This murder is very immoral and is similar to "The Flypaper" and "The Landlady" because the murders are very astonishing. The simple reason why Mary gets away with the slaughter of her husband is because the way she acts and portrays herself after the murder is neither suspicious, nor doubtful. She also gets away with murder because she feeds the only source of evidence to the police officers who are scrutinizing the murder mystery. The writer uses all these techniques to keep the reader involved in the story and always makes the audience want to know what happened next. The ending in "Lamb to the Slaughter" is of a high-quality because Mary giggles when the police officer at the end says "the evidence might be right under our very own noses" this is the reason she giggles and this shows the deceiving side of her. All these stories are good at keeping our interest but out of them all my most preferred is "Lamb to the Slaughter" because it is really good type of murder because she feeds the weapon used to kill to the police officers and they have no evidence that she assassinated her husband. It also kept me most interested because it always made me want to read on and want to know what happened next and Dahl did this in an intellectual way. ?? ?? ?? ?? Zikria Abbas ...read more.