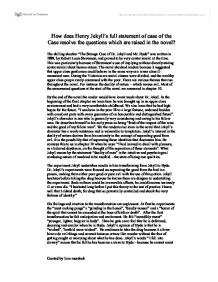 The Strange Case of Dr. Jekyll and Mr. Hyde. How does Henry Jekylls full statement of case of the Case resolve the questions which are raised in the novel?

How does Henry Jekyll's full statement of case of the Case resolve the questions which are raised in the novel? The shilling shocker "The Strange Case of Dr. Jekyll and Mr. Hyde" was written in 1889, by Robert Louis Stevenson, and proved to be very controversial at the time. This was particularly because of Stevenson's use of implying without directly stating controversial about human nature. The novel shocked readers because it suggested that upper class gentlemen could behave in the same way as a lower class ill-mannered man. During the Victorian era social classes were divided, and the wealthy upper class people rarely conversed with the poor. There are various themes that run throughout the novel. For instance the duality of nature - which versus evil. Most of the unanswered questions at the start of the novel are answered in chapter 10. By the end of the novel the reader would have learnt much about Dr. ...read more.

Such as there could be irreversible effects, he could become seriously ill or even die. "I hesitated long before I put this theory to the test of practice I knew well that I risked death; for drug that so potentially controlled and shook the very fortress of identity." His feelings and reaction to the transformation are unpleasant. At first he experiments the "most racking pangs" a "grinding in the bones", "deadly nausea" and a "horror of the spirit that cannot be exceeded at the hour of birth or death". After the first transformation he felt anticipation and excitement. He felt "incredibly sweet" "younger, lighter, happier in body". Then he gets on to feel that he is deformed, decaying and smaller when he is Hyde. Jekyll's opinion of Hyde is that he is "wicked", "tenfold more wicked". He continues to take the drug because it allows him to do evil things and commit heinous crimes like murder without the fear of getting caught or worrying about what he has done. ...read more.

"I had gone to bed Henry Jekyll, I had awakened Edward Hyde". The source of Hyde's increasing strength could be explained, as "the powers of Hyde seemed to have grown with the sickness of Jekyll describes Hyde as his "ape like spite". Hyde loathed Jekyll towards the end of the novel. "the hatred of Hyde for Jekyll was a different order". The "ape like tricks" Hyde pulls on Jekyll "scrawling in my own blasphemies on pages of my books, burning all expressions of Hyde's hated to Jekyll. Hyde's feeling on the experiments is that he is "persuaded that my first supply was impure, and that it was that unknown impurity which lent efficacy to the draught. In conclusion, this chapter is important for the whole novel because it explains all the unanswered questions at the beginning of the novel. Moreover, the effect of it being in Jekyll's words allows us to see what the experiment has been like from Jekyll's perspective. This is important because as we the readers have finished reading the novel we don't want to many mysteries to be remaining. ?? ?? ?? ?? Created by liam murdock ...read more.